Remember Finding the Floor, my project to read my way through my terrible tottering tower of a to-be-read pile? I’ve been working on it, just a little slow to report on my efforts. 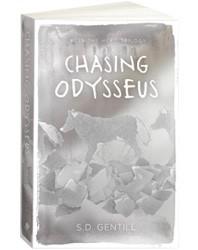 One of the first books to make its way out of the pile was Chasing Odysseus by SD Gentill. The author is a friend of one of my oldest and dearest friends, so I was keen to read it. It’s exciting when someone you kinda sorta almost know actually gets published – Look Ma! Real people can make it in the publishing world! I had a sneak peek at the first few chapters when Sulari had it posted on Authonomy, and thought the premise was a good one.

Basically, it’s the story of Odysseus’ famous journey home from the Trojan War, but told from the perspective of four siblings who are chasing him. They are herders who kept the Trojans supplied through the ten-year siege, but are now fighting to clear their tribe’s name after the fall of Troy. The surviving Trojans assume the herders betrayed them, so now it’s up to Hero and her three brothers to find Odysseus, the real villain behind the fall of Troy, and force him to claim responsibility for his act.

And so we have a wonderful demonstration of the difference that point of view can make. Seeing Odysseus’ well-known adventures through the eyes of Hero and her brothers puts an entirely new slant on them. Needless to say, Odysseus doesn’t come off as quite the hero Homer makes him out to be!

Each chapter starts with a quote from The Odyssey. It’s great fun to see these familiar episodes transformed by the “real story” of Hero and her brothers. I particularly enjoyed the part on Circe’s island. In the Homeric version Odysseus is saved by divine intervention. In fact it’s the quick thinking of Machaon, one of Hero’s brothers, that frees them all from the enchantress’s clutches, in a way that makes Odysseus look a complete fool.

The only divine intervention we see in the novel is by Pan, god of the Herdsmen, who provides a magical boat for the siblings. None of the main Greek pantheon make an appearance, though I hope that may be coming in the next books, since Hero spends such a lot of time praying to them. Her excessive devotion to prayer annoys her brothers, and I grew a little tired of it myself, so I hope it will prove to have a purpose later on.

What the next books in the trilogy will cover I’m not sure, since the story is satisfyingly complete in this book. But that’s a good thing. Too often lately I’ve been reading merrily through a book, only to have that sinking feeling hit me: Oh noes! There aren’t enough pages left to wrap this up – another case of storius interruptus!!

I know some authors and publishers think it’s the kiss of death to put “Book 1 in the Such-and-such Trilogy” on the front cover. What if people don’t like Book 1 so they avoid Book 2? What if they see Book 2 on the shelf but they haven’t read Book 1 and it’s not there so they don’t buy Book 2? What if – gasp! – they won’t buy any of them till the trilogy’s complete because they can’t stand waiting a year between books?

While I can see the validity of these concerns, as a reader I hate realising when I’m almost finished a book that there must be others to come. Not that it makes any practical difference; it’s more an attitude thing. If I know going in the story won’t be finished at the end of the book, I’m prepared. If I assume it’s a standalone and it’s not I feel ripped off.

Ahem. I’ll just hop off my soapbox now. Back to Chasing Odysseus … None of that applies in this case, since the cover announces it’s the first in the Hero Trilogy. Plus – Bonus Points!! – the story arc is actually complete in this book. Complete story + promise of more goodness to come = happiness all round.

One thing I did wonder was: why three brothers? One was the sensible eldest brother, one was the wild and reckless brother, and one was the … well, just the other brother. He didn’t seem to have a lot to do, and what he did could have been combined into the character of one of the others. Perhaps he has a bigger role in the later books. I did sometimes forget which was which, since they were all rather alike. Still, that’s a small quibble; the kind of thing the writer side of my brain thinks about even as the reader side is getting swept along by the story.

Chasing Odysseus is great fun for someone familiar with the events of The Odyssey. For someone who isn’t it would be a good introduction to the world of the ancient Greek legends. Sulari writes well and keeps the story moving along. I just hope she also writes quickly – I want to know what happens next!

3 Responses to Finding the Floor: Chasing Odysseus by SD Gentill