You know how the bad guys in corny movies always say that, usually in a fake German accent? Giff up now, Doktor Jones. Resistance iss futile.

Well, I’ve discovered (or rediscovered) it’s actually much worse than that. Resistance is stressful. Every time you consider doing something you think is going to be hard or unpleasant, and then put it back in the too-hard basket instead, you add to the size of the problem.

“One of the most stressful factors in most of our lives [is] procrastination. Avoiding a subject does not get rid of the stress associated with it. It increases it. The result is that bad time managers are always living with a considerable amount of generalised anxiety.”

Hello, and welcome to my life! I feel as if Mark Forster has been watching me. 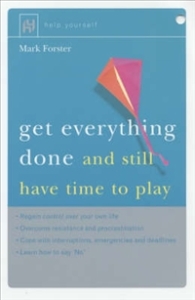 I’ve raved before about his book Get Everything Done and Still Have Time to Play. I reread it again last week, and have been putting some of his strategies to good use. As before, I found using a timer to split my time between different tasks helped to relieve stress by making me feel I was making progress on a number of fronts at once.

The other thing that really helped was his technique of assessing your feelings towards the work you have to do. Resistance is not just futile or stressful, it can also be useful! Which is the task you feel most resistance to doing? Make a start on that one.

It’s amazing how good this makes you feel. It’s like a weight being lifted off your shoulders when you finally do something you’ve been dreading. I tackled a few things that have been hanging over my head this last week, and felt so thrilled to be done with them. The stupid part is how not-scary the things I’ve been scared of actually turned out to be when I knuckled down and did them.

So this morning I again asked myself the question: What am I resisting most right now? And the answer came back: Finishing the first draft of Verity. I’ve had only one last scene to write for the last two weeks, and kept finding other things that “needed” doing more urgently.

Yes, folks – nearly two years after I started it, the first draft of Verity Bloom and the Sea of Stars is finally finished. Imagine what a proud mother I am.