I read 75 books last year, including non-fiction, fantasy, sf, young adult, paranormal and the odd general fiction or thriller. The bulk of them were young adult or paranormal, which are two genres I didn’t read only a couple of years ago. I guess I got tired of my usual diet of epic fantasy, and went looking for something new.

Nevertheless, one of my favourites last year was the biggest, fattest, most epic-y epic fantasy I’ve read in years, The Way of Kings by Brandon Sanderson. 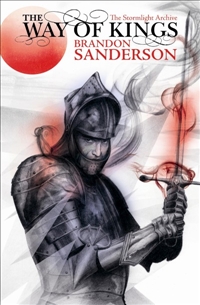 If epic fantasy is your thing, don’t be put off by the stupendous size of this book. So what if you give yourself tennis elbow just holding it up? It’s worth it, I promise you.

Sanderson’s worldbuilding is fascinating. He has the same wonderful knack as Glenda Larke for creating a truly unique ecosystem. His world is ravaged by huge regular storms, which has shaped the way people live and all the creatures that exist. There are also tantalising hints of world history, and you get the sense this is a real world, with all the complexity that entails.

His main character is Kaladin, currently a slave, formerly a talented warrior, who is embroiled in an ongoing war in a very dangerous role. He is part of a crew that carries a bridge for the regular soldiers to cross the chasms that snake through the unusual battlegrounds where the war is taking place. Bridgemen drop like flies all around him, and his struggles to keep his crew alive and find a better life for them make compelling reading. So compelling that I did my usual thing of skipping all over the book. I got so caught up in Kaladin’s chapters that I skipped the ones dealing with the other characters and read Kaladin’s through to the end first, then came back and read the whole thing again in proper sequence.

Not that the stories of the other main characters aren’t interesting – far from it! It’s just that Kaladin was the best-drawn character in a book full of great characters. A win-win situation, really. The only downside is I have since discovered this is the first book in a projected series of ten, which means I’ll be waiting a long time for the end of the story, á la Robert Jordan and George RR Martin. Let’s hope Sanderson is a faster writer than either of those guys. At least Book 1 did have a very satisfying conclusion, while leaving some of the larger series questions open. 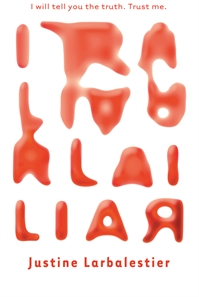 The other real stand-out of the year for me was Liar by Justine Larbalestier, a Young Adult which I’ve already reviewed here. A truly mindblowing book.

I read lots of other fun YA too, including some of the Percy Jackson books by Rick Riordan and the Skulduggery Pleasant series by Derek Landy. Skulduggery is a detective, and the books are fast-paced, full of magic and mayhem. The really fun part is that Skulduggery is dead – he’s a skeleton, and a wisecracking one at that.

Derek Landy visited Australia in 2010, promoting the (I think) fifth book in the series, and we went to see him at our local children’s bookshop. He was very entertaining, much like his books. Demon Duck asked him where he got the idea for a skeleton detective.

“Out of my incredible brain!” he said.

I found some new authors on my visit to Aussiecon in September, and one of them was Tansy Rayner Roberts. 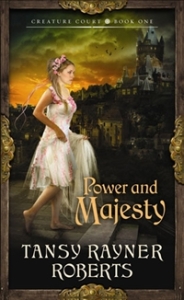 Her Power and Majesty is the first in the Creature Court trilogy, and I’m eagerly awaiting the second instalment, due out in April, I think. This book starts with a bang – naked guy falls from the sky, off his face on drugs, observed by our country bumpkin heroine, who’s just arrived in the big city to take up an apprenticeship as a seamstress. When it turned out she was the only one who could see him because of her hitherto-unsuspected magic, I thought I knew where this book was going. But no – instead of becoming her mentor, he takes her magic with her blessing.

And that was just the first surprise this book had in store. Later ones were much more jarring, so much so I had to reread pages several times to be sure what I thought had just happened really had. Roberts isn’t afraid to inflict suffering on her characters, and there are some pretty dark and dangerous ones in this book. Also lust, betrayal, a strong heroine and a very strange and as-yet unexplained adversary. I was so eager for more that when the book ended I had to read the whole glossary, something I never usually even look at, just so I could stay in the rich world of Aufleur a little longer.

Another world I like to visit is that of Charlaine Harris’s Sookie Stackhouse novels. It’s southern USA, only changed by the discovery that vampires are real. They “came out of the coffin” when Japan invented a synthetic blood they could live off, and the revelation has had profound political and cultural effects on society. It’s also made Sookie’s life a lot more complicated than it used to be. She’s a telepath, so not only are the vampires after her body, they’re after her mind as well. 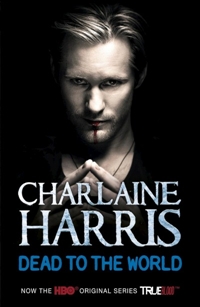 Dead to the World is my favourite of the series so far. I could tell you the telepathic barmaid is a great character with a distinctive voice (true), and each book in the series adds new and interesting complications to the overall story (also true), but why do I really love this series?

And this book is my favourite because it’s the one where Eric, the powerful (and hot – did I mention the hot vampire lovers?) regional overlord, who’s been lusting after Sookie for three books now, loses his memory. Instead of being a menacing (but hot!) figure, he has a complete personality change and becomes endearingly dependent on Sookie, who finds him running down the road near her house in the middle of the night. It’s romantic. The hot sex doesn’t hurt either. Ahem. 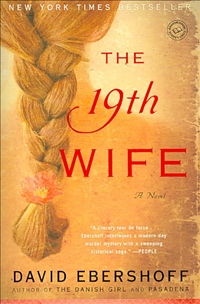 Sex as oppression this time. The 19th Wife by David Ebershoff was a very interesting exploration of what it means to be a wife in a polygamous marriage. The novel actually tells the stories of two nineteenth wives – a woman in a present-day Mormon sect accused of murdering her husband, and the based-on-historical-fact story of Ann Eliza Young, the nineteenth wife of one of the founders of the Mormon church, and her struggle to end polygamy.

The modern story is narrated by a teenage boy. His mother is the nineteenth wife, accused of murdering his father, neither of whom he has seen since he was thrown out of the sect at 14 and left to fend for himself. This part of the story follows his efforts to prove his mother’s innocence, no easy task given the sect’s attitude to outsiders.

Woven together the two stories present a damning indictment of the practice of polygamy. It was fascinating to read but also depressing to consider how much misery is caused by men using religion as an excuse for not keeping their libidos under control.

On the non-fiction front my favourites were two books I’ve already discussed on the blog. 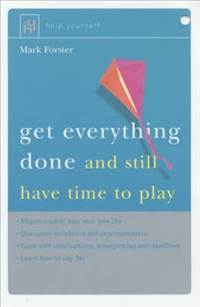 The other one is The Sweet Poison Quit Plan by David Gillespie, which I discussed here. 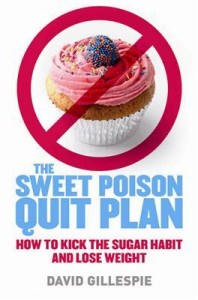 You know how people talk about “books that changed my life”? Well, this one really did! If someone had told me at the beginning of 2010 that I would give up peppermint chocolate that year I would have laughed. 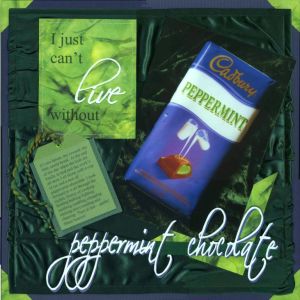 Me? Give up peppermint chocolate?? Inconceivable!

Yet I not only did, I don’t even miss it. In the process I also gave up headaches every morning and about four kilos. Not a bad deal, I say!

I wish I could make everyone in the world read this book (David Gillespie probably wouldn’t mind that either!). The facts it presents are quite scary, and make a compelling argument against eating sugar. Anyone whose New Year’s resolutions revolve around healthier eating or losing weight could do worse than have a look at it.

There were lots of other good books on the reading list, but those were the stand-outs. I have plenty of happy reading to look forward to this year as well, since the To Be Read pile has hardly shrunk. Books just seem to find their way into the house, and I’m always looking for new things to read. Does anyone have any recommendations for me of something they’ve enjoyed?

2 Responses to Favourite books of 2010