The Twelve Reads of Christmas: The 4-Hour Work Week by Timothy Ferriss

On the fourth day of Christmas, my true love read to me: The 4-Hour Work Week, Three Wishes, Two Boys Kissing and One Shotin a pear tree.

Continuing The Twelve Reads of Christmas, today I’m reviewing my first non-fiction book in the series: The 4-Hour Work Week by Timothy Ferriss. 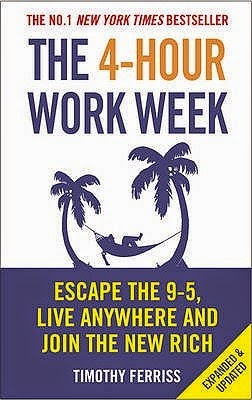 I really wanted to love this book. What’s not to like about a book that suggests you should work less and live your life more, and promises to teach you how to bring that happy state of affairs about? We can all agree that you shouldn’t wait till you’re retired before you start living, right?
Ferriss’s argument is that we should make life a series of mini-retirements, spending quality time on fun and fulfilling pursuits, not remain stuck in the 9-to-5 grind. We should establish an internet business that runs itself to fund our new improved lifestyle, and if we are an employee, we need to switch to working remotely instead of being tied to the office, so we can work from anywhere in the world while we party.
Ferriss himself has done exactly this, and has an impressive list of achievements to show from his new lifestyle, including acting, dancing, motorbike racing, learning other languages and enjoying much martial arts success.
For instance, he won a gold medal at the Chinese Kickboxing National Championships, after four weeks of training. He achieved this with a two-pronged assault. First, he lost a massive amount of weight by dehydrating just before the weigh-in, then rehydrating before the fighting the next day. As a result he fought in a weight-class three below his actual class. Secondly, he exploited a technical loophole that disqualified anyone who fell off the fighting platform three times in a round, and won all his fights by just pushing people off till he was declared the winner.
To me, there’s such a difference between being able to say you’ve won a gold medal, and actually earning one, that reading this made me feel I was in the hands of a snake oil salesman.
To be fair, the book does what it says on the tin: he outlines, in often exhaustive detail, the steps he took to become a free-range member of what he calls the “New Rich”. There are lots of references to books and online resources, many of them on his own website, aimed at helping the reader duplicate his methods.
And many of his points make perfect sense. For instance, most people realise that working from home (if you have the kind of job that allows it) is vastly more efficient than working in the office with all its distractions, meetings and telephone interruptions – not to mention the time saved by removing the daily commute from the equation.
The part I object to is when he gets down to the nitty gritty of how to achieve a permanent working-from-home solution. He outlines a step-by-step plan for employees to prove to their bosses how much more efficient they are at working from home in order to gain permission to work remotely all the time. The plan suggests, among other things, that they should deliberately be less productive on the days they are in the office so as to make their output at home look even better.
And of course the whole point of working from home all the time is so you can travel and win kickboxing championships when your boss thinks you’re working.
Not that he’s suggesting you shouldn’t do the work – see the aforementioned point about how much can be achieved in smaller amounts of time when you’re free of distractions. Plus you can always outsource some of your work to “Virtual Assistants” in India, at a much cheaper rate than doing it yourself. Who knew?
So yeah. I really wanted to like this book. Maybe I’m just not the right audience. I’m sure some go-getting entrepreneurial type could get a lot out of it. And he does have some good ideas for cutting distractions and focusing on more productive behaviours instead of just being “busy”.
But I ended up feeling vaguely dirty for having read it.
So, for something much more wholesome – the fifth day of Christmas features a blast from the past: Five On A Treasure Island by Enid Blyton.

2 Responses to The Twelve Reads of Christmas: The 4-Hour Work Week by Timothy Ferriss