The Twelve Reads of Christmas: Five on a Treasure Island by Enid Blyton

On the fifth day of Christmas, my true love read to me: Five on a Treasure Island, The 4-Hour Work Week, Three Wishes, Two Boys Kissing and One Shotin a pear tree.

I say, chaps, today I’m continuing my review series The Twelve Reads of Christmas with a jolly exciting book from my childhood. Golly, but I did enjoy it so back then! Better than ham sandwiches with ginger pop – the simply smashing Five on a Treasure Island by Enid Blyton. 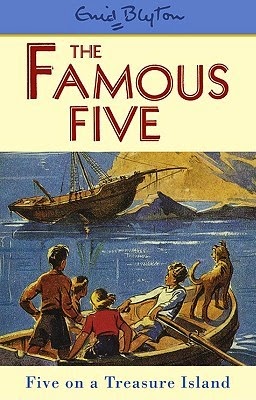 Five on a Treasure Island is the first of many Famous Five adventures. I adored these books as a kid, and read the adventures of siblings Julian, Dick, Anne, their cousin Georgina (who liked to be called George) and of course Timothy the dog over and over again. I loved them so much I filled three exercise books when I was about Baby Duck’s age with the adventures of the Romney children, the eldest of whom was a girl named Marina who liked to be called Mark. Blyton fan fic before I even knew what that was!
In this book the five meet when the three children are dumped for the summer on an aunt and uncle they barely know. Mother and Daddy are off to Scotland, just the two of them – how smashing! – and “as you are really getting big enough to look after yourselves now”, as Mother says, the children have to find somewhere else to stay.
That raised my motherly eyebrows, I can tell you. These kids are 10, 11 and 12, and the parents are so close to the family they’re proposing to leave their kids with they have trouble remembering the name of their eleven-year-old daughter. (That would be their own niece.) Nice one, Mother and Daddy!
I guess kids were less cosseted in those days.
However, this seemed like a fine plan to my childhood self. After all, how can you have a decent adventure with your parents hanging around? Disney usually gets around the problem by killing off the parents post haste, so Mother and Daddy should probably be grateful they get some couple time in Scotland rather than, say, a fatal car accident.
And, gosh, but there are adventures! Blyton knows how to hit all the right buttons: a seaside cottage, a sunken wreck in the bay, a private island to explore witha ruined castle on it plus A SECRET TREASURE MAP.
OMG but I loved treasure maps as a kid, and I think this is where it all started. I used to draw them for my slightly younger nephews, and construct elaborate games wherein we discovered “treasure” in the backyard. The Famous Five gave me hours of pleasure even beyond the reading of the books, influencing the games I played and the stories I wrote.
Reading it again now, I’m struck by two things. First, how “innocent” it all was. The bad guys in this novel are the most laughable villains I’ve ever heard of. They may threaten to shoot the dog, but never point their guns at the children. They discover a treasure map leading to a hoard of gold ingots on the island George’s family own, and instead of just turning up one dark night and plundering the place, they arrange to buy the island. So law-abiding! And when they lock two of the children in a dungeon on the island, they most considerately bring down food and water though they’re only planning to be gone for an hour. How jolly thoughtful of them!
It all seems so civilised and non-threatening, compared to the perils children usually face in contemporary children’s fiction. They say the past is another country, don’t they? Things are done differently there.
Sadly, it’s often a country you can’t revisit, either – at least not with the same amount of pleasure as the first time.
The second thing I see as an adult that I was completely oblivious to as a child is the hideous gender stereotyping. Back then I adored George, and rather fancied myself as a tomboy too because of her (though I wasn’t particularly). It’s easy to see the attraction. She’s far more interesting than her jolly nice but rather colourless cousins. She gets to behave badly and have feelings that aren’t all sweetness and light. She’s the most active character in terms of pushing the plot along.
But now, by page 14 I’m already grinding my teeth. Anne, the perfect girly girl, tries to get George to toe the gender line with this speech:
“You won’t find that my brothers take much notice of you if you act as if you know everything. They’re real boys, not pretend boys, like you.”
Oh. My. God. The ultimate threat – my brothers won’t take notice of you! Because that’s the goal of every girls’ life, isn’t it, to be noticed by boys?
And you can’t act as if you know everything when you’re a girl, because that’s what boys do, and they’ve got the monopoly on it.
And no matter how much you try to be like them, you’ll never be good enough because you don’t have a penis, those magnificent pieces of anatomy that magically confer superiority.
The book is riddled with stuff like this – the continuous loving patronising of Anne by her brothers, the careful protection of her because she’s a girl, Dick’s fury at her when she tries to persuade George that boys do cry sometimes. George, of course, never cries, because crying is something girls do.
At one point George does actually cry because some very cry-worthy things have happened. She immediately apologises:
“ ‘I’ve been behaving like a girl,’ she said, half-ashamed.”
Gosh, we can’t have that, can we?? Behaving like girls? How simply beastly!
Sigh.
I still have fond feelings for the Famous Five, because of the joy they brought me as a child. But I don’t think I’ll be rereading any more. The past was a beautiful country, but I’ve changed too much to enjoy the view now.
Coming up on the sixth day of Christmas: The Six Sacred Stones by Matthew Reilly.

2 Responses to The Twelve Reads of Christmas: Five on a Treasure Island by Enid Blyton