The Twelve Reads of Christmas: Ten Big Ones by Janet Evanovich

By Marina | January 7, 2014 - 6:12 pm |December 11, 2014 reviews, The Twelve Reads of Christmas
On the tenth day of Christmas, my true love read to me: Ten Big Ones, Nine Parts of Desire, When Eight Bells Toll, The 7 Habits of Highly Effective People, The Six Sacred Stones, Five on a Treasure Island, The 4-Hour Work Week, Three Wishes, Two Boys Kissing and One Shotin a pear tree.
Today, for the tenth day of my series The Twelve Reads of Christmas, I’m reviewing Ten Big Ones by Janet Evanovich. 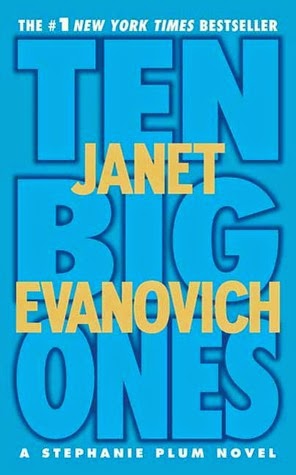 This is the tenth book in a series about bounty hunter Stephanie Plum that began with One For the Money and is up to Takedown Twenty with no sign of stopping yet. I haven’t read any of the others and it didn’t affect my enjoyment at all. I’m guessing, like a TV serial that offers a self-contained story every week, you could start with any of these and enjoy Stephanie’s current dilemma without knowing any of the backstory.
And, like a good sitcom, the cast of supporting characters is a big part of the fun. Stephanie is surrounded by larger-than-life characters like her crazy grandmother and her sometime sidekick. Sometimes their antics teeter on the edge of the unbelievable – and sometimes Stephanie herself behaves in ways that seem to suit the convenience of the plot rather than having much to do with reality – but it would be churlish to pick at such minor points when the overall reading experience is so good.
“The way I see it, life is a jelly doughnut,” the novel begins. Shades of Forrest Gump, but I love where Evanovich goes with this:
“You don’t really know what it’s about until you bite into it. And then, just when you decide it’s good, you drop a big glob of jelly on your best T-shirt.
My name is Stephanie Plum, and I drop a lot of jelly globs, figuratively and literally.”
Aaah. I can feel myself relaxing into the novel already. I love the voice, and a good voice is a huge part of a novel’s attraction. Plot is important, and if you don’t have a good plot you lose me as a reader, but the best plot in the world won’t keep my interest if the voice doesn’t draw me in to the world of the novel.
If there was any doubt that we are in the hands of a writer who knows her stuff, it’s blown out of the water by the first exchange of dialogue:
“ ‘Hey,’ I said to Lula. ‘What happened to the filing job? Who does the filing now?’
‘I do the filing. I file the ass out of that office.’
‘You’re never in the office.’
‘The hell I am. I was in the office when you showed up this morning.’
‘Yeah, but you weren’t filing. You were doing your nails.’ ”
As a reader, I’m grinning. I can hear those voices. As a writer, I’m in awe of her assured handling of dialogue. One “said”. No adverbs. No descriptions of what people are doing. Just a great back-and-forth that says a lot about these characters and their relationship. I could learn a lot here.
The plot races off, with Stephanie soon in danger – though it’s a close call whether she should be more frightened of the gangsters who are after her or her sister’s wedding plans. She has two hunky male love interests trying to protect her, but in the end salvation comes from a totally unexpected, but vastly amusing, source.
It hardly even matters what the plot is. The journey is pure entertainment. I’m not sure what genre you’d call this – I thought these were crime novels but, while there are plenty of criminals, there’s no mystery to solve. Romantic adventure, maybe?
Whatever you call it, it’s a great read. Highly recommended.
Almost at the end of our Twelve Reads of Christmas now! Coming up for number eleven is 11 Birthdays by Wendy Mass.