The Twelve Reads of Christmas: Nine Parts of Desire by Geraldine Brooks

On the ninth day of Christmas, my true love read to me: Nine Parts of Desire, When Eight Bells Toll, The 7 Habits of Highly Effective People, The Six Sacred Stones, Five on a Treasure Island, The 4-Hour Work Week, Three Wishes, Two Boys Kissing and One Shotin a pear tree.

Today, for the ninth day of my series The Twelve Reads of Christmas, I’m reviewing another non-fiction work, Nine Parts of Desire by journalist Geraldine Brooks. 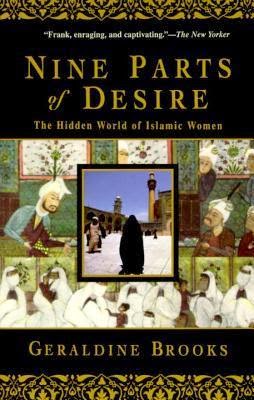 This book is subtitled “The Hidden World of Islamic Women” and is an exploration of the many facets of life as a Muslim woman, both historically and in today’s world. It is based on Brooks’ extensive travels through many Islamic countries and tells the stories of the women she met on the way. Some are well-known figures such as Queen Noor of Jordan, or the daughter of Ayatollah Khomeini. Others are everyday women living their lives in accordance with the teachings of the Koran and the words of the Prophet Muhammad.
The book’s title comes from a quote from the founder of the Shiite sect, who was married to the Prophet’s favourite daughter: “Almighty God created sexual desire in ten parts; then he gave nine parts to women and one to men.”
A lot of Islam’s teachings and customs regarding women seem to stem from this attitude. Women are the temptresses, who must be controlled and covered up so as not to lead men into sin. I find it fascinating that the world’s other major religion, Christianity, takes the opposite view: men have all the desire, and women are the innocent objects they seduce and ruin. Yet the two opposing viewpoints arrive at the same conclusion: women must be controlled and held responsible for the actions of men.
Basically, ladies, we can’t win.
This is a fascinating and well-researched book which gives a great overview of the issues to do with women and Islam, with chapters on such things as clothing restrictions, sexual control through clitoridectomy and honour killings, polygamy and jihad, amongst others. But though academically it’s interesting, it’s difficult to read without getting angry. So many women are deprived of basic human rights in the name of religion, though in fact the teachings of the Koran have very little to do with the customs that have grown up over the centuries.
The sections that talk about the life of Muhammad and his dealings with his many wives are particularly interesting. I see parallels here with the founder of the Mormon church, who also received many revelations from God that seemed helpful to his own particular desires.
Muhammad’s favourite wife Aisha was quick to point out the coincidence of how many of the Prophet’s divine revelations touched on his own situation. “It seems to me … your Lord makes haste to satisfy your desires”, she said of Muhammad’s revelation that the incest laws against a father marrying the wife of a son didn’t apply to adopted children, thus clearing the way for him to marry his adopted son’s desirable divorced wife.
Everywhere in this book are things to make you grind your teeth. Did you know that Islam prescribes a dress code for men too? No, neither did I. That’s because it’s not adhered to. Men are free to wear whatever modern, revealing fashion they like, while the dangerous bodies of their wives and daughters must be swaddled in heavy black disguises.
I would say I recommend this book – except I worry about your blood pressure if you read it. It’s fascinating but infuriating, important but depressing. Read at your own risk.
At least you’re able to. For many Muslim girls, reading and education are an impossible dream.
Coming up next, something a little lighter: Ten Big Ones by Janet Evanovich.