The Twelve Reads of Christmas: When Eight Bells Toll by Alistair MacLean

On the eighth day of Christmas, my true love read to me: When Eight Bells Toll, The 7 Habits of Highly Effective People, The Six Sacred Stones, Five on a Treasure Island, The 4-Hour Work Week, Three Wishes, Two Boys Kissing and One Shotin a pear tree.

Today, for the eighth day of my series The Twelve Reads of Christmas, I’m reviewing a book that’s nearly as old as I am, When Eight Bells Toll by Alistair MacLean. 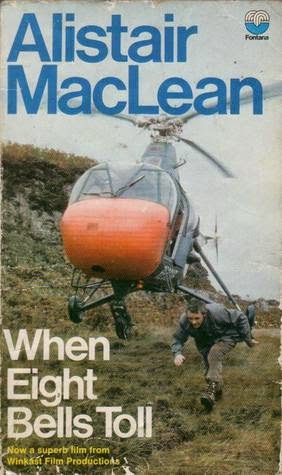 This book is so old that my copy has pictures from the movie on the cover, showing Anthony Hopkins looking young and dashing. James Bond-like, even. I didn’t realise he was ever leading man material – I’ve only seen him play old or, at best, middle-aged characters.

The story begins rather like One Shot, with a detailed description of a gun. The writing is more lyrical and the sentences more traditionally structured than in One Shot, but there is still a lot of gun-related information. We are nearly at the bottom of a very wordy first page before it’s even mentioned that this particular gun is pointing right at the first person narrator.
Talk about burying the lede!
This is one of the things that make this book feel its age. It takes its time getting to the point of anything in a way that thriller writers these days just don’t do (at least in my limited experience). We don’t even find out what the whole point of the book is till about three-quarters of the way through. Till then our hero, a secret service agent on a mission in the remote harbours of Scotland, does a lot of secretive messing about on boats, but we don’t know why.
A couple of other things that date the book are pop culture references that mean nothing any more, and a rather wince-inducing attitude to women on the part of our hero.
The book is not without its charms, though. The narrator has a wry humour that’s quite entertaining. Discussing two dead colleagues, who in life had the still watchfulness common to men in their profession, he says “and I had no doubt they had gone on being as still and watchful as ever, but they hadn’t been watchful enough and now they were only still”.
But I have to admit, I wouldn’t have finished the book if I hadn’t been reading it for this series. The plot was well-structured, if a little predictable in places, but somehow the writing held me at a distance. I had trouble caring what happened to any of the characters, and could easily have set it down at any time. I freely admit I’m probably not the target audience, and I don’t read many thrillers, but it was more than that. One Shot kept me turning the pages all right. This one was perhaps too much of an intellectual puzzle, just not compelling enough on an emotional level.
Quite possibly the fact that we didn’t find out what was going on till late in the piece was part of the problem. If you don’t know what the stakes are, how can you care what happens?
I’d probably recommend you watch the movie instead. If nothing else, you get to see Anthony Hopkins with hair!

Coming up on the ninth day of Christmas: Nine Parts of Desire by Geraldine Brooks.

2 Responses to The Twelve Reads of Christmas: When Eight Bells Toll by Alistair MacLean