The Twelve Reads of Christmas: The Six Sacred Stones by Matthew Reilly

On the sixth day of Christmas, my true love read to me: The Six Sacred Stones, Five on a Treasure Island, The 4-Hour Work Week, Three Wishes, Two Boys Kissing and One Shotin a pear tree. 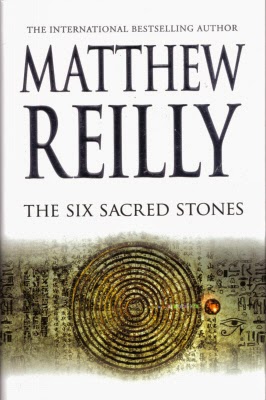 The Six Sacred Stones is a new adventure for ex-special forces soldier Jack West and his trusty band of sidekicks, after their first outing in Seven Ancient Wonders. Once again, they are called on to save the world, this time from an approaching “Dark Sun”, some kind of super-multigrated black hole lurking behind Jupiter which will soon destroy all life on earth.
That is, unless Jack and the gang can find the Six Sacred Stones, some very special matching diamond Pillars, charge the Stones in another ancient and Special Thingy, then somehow get all the Stones and the Pillars to various exotic hidden-since-ancient-times locations around the globe, where huge upside down pyramids await … and somehow start The Machine That Will Save the Earth. Which was probably devised by an ancient civilisation of people who existed before people began.
Or something. I stopped trying to follow it all after a while and just settled back to enjoy the ride. There are a lot of excited capitalisations: Pillars! Stones! Vertices! Potatoes! (Just kidding about the potatoes.) There are breathless sentences like this:
“He quickly slid up over the cockpit dashboard and stood out on the nose of the Clipper, in the battering wind, between the two flying planes!”
(Italics and exclamation mark are Reilly’s.) You get the impression that Reilly is enjoying himself hugely, and if you are prepared to let go of the idea that plots should be at least vaguely possible and the laws of physics ought to be observed at all times, then you can enjoy the read too.
It’s like the old-time Saturday afternoon matinees – highly improbable and wildly entertaining. No one expects realism of Indiana Jones, and Jack West is much the same.
And I thought Jack Reacher was annoyingly perfect in One Shot! Jack West makes him look like a bumbling amateur. (And what is it with all the Jacks? Did someone publish a list of Manly Man’s Names that I missed? Let me guess what was in the Number One spot.)
It’s all ridiculously over the top. The villain is Extremely Evil. No, seriously, he’s a Very Very Bad Man. We know this because right at the start he tells a subordinate who has failed in his mission:
“Now, if you wouldn’t mind, Black Dragon, shoot yourself in the head … You were responsible and so you must pay the ultimate penalty.”
Isn’t that awesome? You must pay the ultimate penalty. Who talks like this?
Well, everyone in the book, actually. There is no characterisation. Unlike Liane Moriarty’s writing in Three Wishes, where you knew whose point of view you were in even from the word choices and syntax of the narration, much less the dialogue, everyone sounds the same. Here’s an eleven-year-old boy:
“the Altar Stone, if re-erected, would be at the very heart of the structure”
But such niceties as characterisation are as unnecessary as the laws of physics. Such things are not part of this book’s appeal.
It’s a very visual book. You could see it making a rollercoaster ride of a movie. Indeed, there are lots of pictures and diagrams included amongst the text, as if Reilly doesn’t trust the reader to follow his written explanations without help. Or maybe he’s just so enthusiastic he wants to share all the fun bits with his readers.
There’s a kind of comic-book exuberance to the writing that is very appealing. You can see Reilly’s done a lot of research and constructed a very convoluted plot that hangs together well. In some of his other books he’s relied on the most appalling and unlikely coincidences to hold his plot together. Thankfully, there’s none of that here (just thinking about Ice Station makes me want to punch someone), and his characters manage to extricate themselves from some truly diabolical situations through a lot of ingenuity and a good helping of preparedness.
But I must warn you – if you read this, be prepared for a truly blatant cliffhanger at the end. Normally, this would be enough to make me refuse to ever read another book by the same author again. I hate cliffhangers with a passion. To me, a novel has a beginning, a middle and an end – and if you’ve taken my money supposedly for a novel, and it’s missing the last of those three elements, I’m a very annoyed little reader.
In this case, my rage is held at bay by the knowledge that I have the next book on my shelf already. But if I’d read this when it was first published, I would have been Highly Ticked Off.
So be warned – it’s an engaging, larger than life read, as long as you’re not expecting anything too firmly rooted in reality – but make sure you have The Five Greatest Warriors on hand before you start, because this is not a complete story. The world is still in peril! Oh Noes! But don’t panic. I have a feeling Jack West will save the day.
Next up, on the seventh day of Christmas, I review the classic self-help book The 7 Habits of Highly Effective People by Stephen R Covey.