New Zealand is a beautiful country, and I took scads of touristy photos of all the gorgeous places we visited, but as I mentioned in my previous post on New Zealand through a quilter’s eyes, I also took some that appealed to the quilter in me and left my family scratching their heads.

At the Waitangi Treaty Grounds we saw a 35m waka or war canoe, built in 1940 for the centenary of the signing of the treaty between the British and the Maori. Its name was almost as long – Ngatokimatawhaorua. Old skills had to be relearned to construct the canoe in the traditional way, including intricate carving like this: 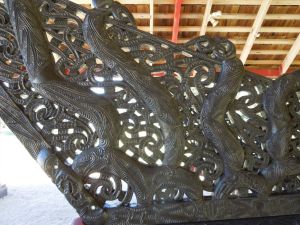 Such gorgeous texture and pattern.

More texture caught my eye in Waipoua Forest. The mighty kauri trees had such interesting bark, almost like dinosaur skin. 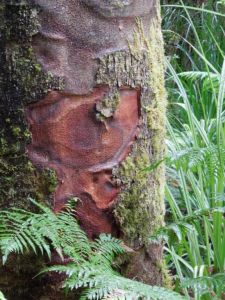 You can’t see the effect so well on this one, but I loved the contrast of the fluffy, almost velvety green moss against the red whorls of the trunk. 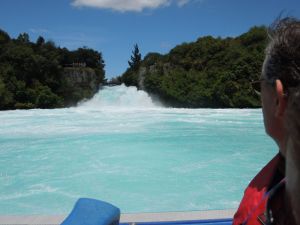 Can you believe that fabulous clean blue-green water??

For a different shade of blue, here’s a shot across Lake Taupo, the biggest freshwater lake in Australasia, formed in the crater of an old volcano, which must have been truly enormous. 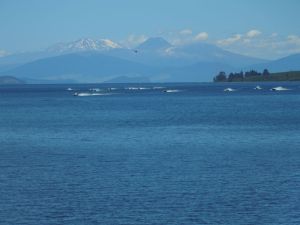 You can see the peaks of active volcanoes in the background. When Taupo itself last erupted, about 2000 years ago, it buried the country for miles around in 200 metres of ash. The red light of it in the sky was seen as far away as Rome and China. I sure wouldn’t like to be around if it ever went up again!
In the town of Taupo itself I embarrassed my children enormously by taking photos of the garbage bins. I have to admit, even I felt a little peculiar about it, but look – they were so gorgeous! – how could I resist? 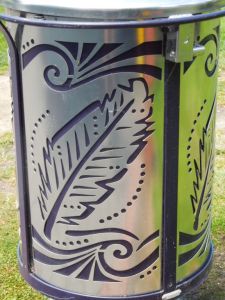 In Hamilton, there was lots to admire in the very pretty Hamilton Gardens. 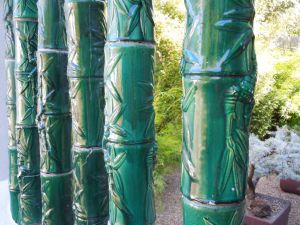 and an absolute riot of colour: 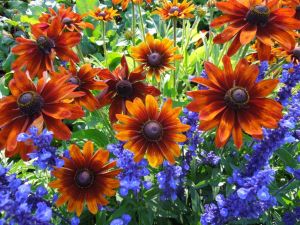 How eye-popping is that colour combination? Wouldn’t it look sensational in a quilt?

Then there was this café at the glow worm cave at Waitomo. It made me think of quilting too, with the diamonds formed by the lovely arching lines of the overhead shelter very reminiscent of a quilting pattern. 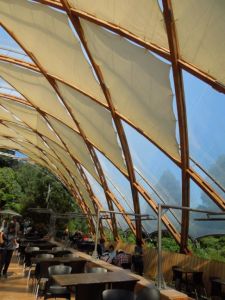 Really, there’s quilting inspiration everywhere. If only there were enough time to make all the quilts I can imagine!