What’s on the wall?

Baby Duck says there are too many linktastic posts on my blog lately, and not enough about important things like him. He has kindly given me many helpful suggestions on what I might write about, from his grand scheme to earn Lego by watering the lawns to his marvellous artworks in the school art show.

Since he is one of my main readers, I guess I’ll have to pull my socks up – but not today. More on the art show anon, but today I’m going to show you the evolution of a quilting “artwork”, in the hopes that this will fire my enthusiasm to finish this one off. It’s been hanging on my design wall for about six months now, and though I still like it, I’m getting sick of looking at it! Time for a change.
This started life as a jelly roll, which is a fancy name for a set of forty 2½ inch strips rolled up into a pretty bundle like this: 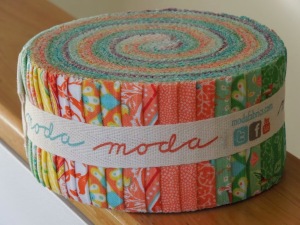 I spent about three hours in December last year engaged in what is known as a jelly roll race, where you sew the forty strips end to end into one ginormous long strip, and then go through more sewing stages where the strip gets progressively shorter but wider, till you end up with a random-looking quilt top like this: 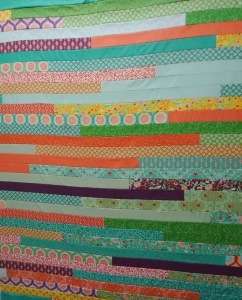 (Sorry if that explanation made no sense. If you’re interested you can see a video with a much more lucid explanation

Not quite enough flowers, I thought. My garden looked a little lost and spread out. Back to hacking printed flowers and black circles out of fabric, and a little rearrangement: 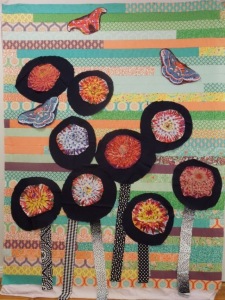 That looked better, so then I put all the stems in: 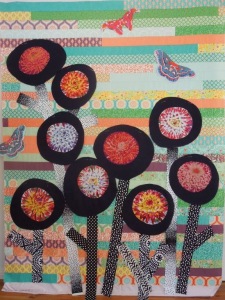 Mind you, none of this is sewn down yet, only glue-basted on (which is a technique I haven’t tried before: so far, so good. Nothing’s fallen off the wall yet!). The plan is to put the three layers of the quilt together and then attach everything as I quilt – save the step of sewing the quilt top first, then quilting later. Genius lazy plan, I hope. We’ll see if it works.

Then I started adding borders, and of course that was where I stopped – because the creative fun was all over. Adding borders and finishing things off is boring, at least for this attention span-challenged quilter.
But now it’s nearly December again (as Christmas-obsessed Baby Duck delights in pointing out) and way past time to get this down off the wall and into the finished pile. It’s so cheerful and fun. Hopefully soon I can show it to you in all its finished glory!

2 Responses to What’s on the wall?