Is this the world’s stupidest dog? 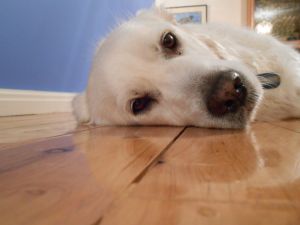 I’m starting to think so. Guess where she is today?

At the vet’s. Being operated on. Again.

Just one of those things, you think. You can’t really expect a dog not to try and gobble manna from heaven, can you? Shame Baby Duck wasn’t fast enough to grab the skewer before she did, but what can you do? A once-in-a-lifetime freak accident.

Or not, as it turns out.

On Monday she vomited a couple of times. Nothing unusual there – till the Carnivore noticed weird streamer-like things in it. White, about 5 mm wide, made of some kind of light plastic or fabric. We wracked out brains but couldn’t imagine what she’d eaten, or where she’d found it. Could some packaging have blown over the fence from the building work next door? It seemed unlikely, but what else were we to think? She will occasionally chew on things she finds in the backyard, but she doesn’t eat things out of the house – not since her puppy days.

Except now she does, apparently.

Yesterday morning there was more vomit and she wouldn’t eat breakfast, so we took her to the vet. Still mystified, we showed the streamer thing to the vet. It wasn’t until Drama Duck came home that we identified it. It was ribbon. She’d left a spool of it on her bedroom floor after a friend wrapped a present on the weekend. The next day she’d noticed the spool was broken and empty, but just assumed her friend must have used more ribbon than she’d thought.

I’m still shaking my head over this one. The chicken skewer I could understand. That was food. But ribbon? What on earth possessed the stupid animal? Who sees a spool of ribbon and thinks hmmm, that looks tasty?

So today the vet has the delightful job of hunting through her innards for it. Who knows how much is in there? 10 m? 20? It was originally a 50 m spool, but we don’t know how much was left on it when she decided to chow down on it. Several metres has already been up-chucked all over our backyard, but there’s obviously still enough in there to block up the works.

The vet tells me he’s known dogs to eat padlocks, mobile phones, even remote controls. Ribbon seems almost tame by comparison, but unfortunately, being long and linear, it’s a devil to get out again. Stupid bloody dog.

Has anybody else got any good stupid-things-my-pet-has-done stories? Please tell me I’m not the only one!