Remember the story of the $327 hair-washing hose? Ha! That was nothing. Just a trifle. I now have a much better “outrageous sums of money my children have cost me” story. 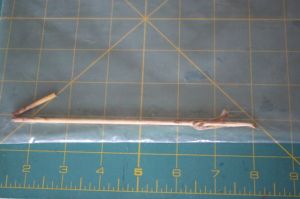 This is the skewer that, covered in yummy chicken, Baby Duck dropped on the floor on Sunday.

“Pick it up!” his sisters yelled, but Baby Duck, not being a man of lightning reflexes – or possibly any reflexes at all – sat and watched as the dog pounced. I rushed back in from the kitchen, barely ten feet away, but too late.

I’m still gobsmacked that she managed to down the whole thing so quickly. How do you swallow a whole 8-inch skewer loaded with chicken that fast? I kept staring at the floor, expecting to see pieces of wood – I mean, really? Who eats the wood? – but there was nothing.

So the worrying commenced. Monday morning she threw up, but she seemed so normal otherwise I crossed my fingers and hoped it was unrelated. When she did the same thing Tuesday morning I had to give up on the coincidence theory and take her to the vet. The vet checked her out but could find no other symptoms so it was back home to the worrying and watching.

Finally on Friday morning we had a different dog. Instead of bounding out of her bedroom (the laundry), eager to hoe into breakfast, she limped out and looked at Drama Duck as if to say “do I really have to eat that?” She had a couple of mouthfuls to be polite but that was it. She could hardly manage the stairs either and was obviously in pain, so it was straight into the car and back to the vet.

They operated and found the skewer had gone through her stomach wall and was heading for her liver. Fortunately there were no signs of peritonitis, which was my big worry, so they removed the skewer and sewed her back up. I’ll spare you the close-up of her scar – it’s quite gruesome. 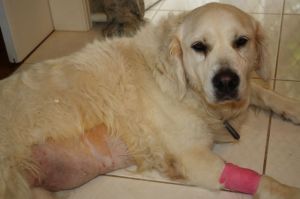 But she’s back home now, looking sore and sorry, poor baby. The Carnivore’s feeling rather pained too.

“We could have let this one die and bought two dogs for that kind of money,” he grumbled. Can’t let anyone suspect he’s actually fond of the stupid animal.

I was so pleased the vet kept the skewer for me. Is that weird? I was busting to take a photo and share it with you. I guess I’ll just throw it out now, though it’s tempting to hang it round Baby Duck’s neck, like the albatross in “The Rhyme of the Ancient Mariner”, to remind him to be a little faster next time he drops something on the floor.

Or I could just dock his pocket money for the next 40 years or so.