The Twelve Reads of Christmas: One Shot by Lee Child 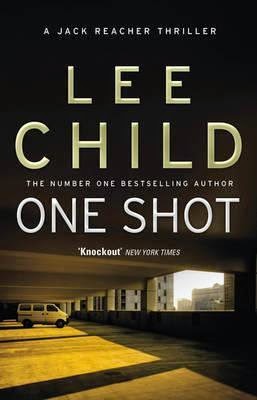 Some of you may have seen the recent movie Jack Reacher, starring Tom Cruise. Oh, the travesty! Reacher’s meant to be a big ugly customer about 6 foot 5. Tom Cruise is at least 8 inches too short and waaay too pretty to play Reacher. Casting decisions aside, that movie was basically the novel One Shot, with a few things about the climax changed. Not a bad movie, actually, if you can overlook Tom’s … er … shortcomings.
And the Reacher books are not bad books, either. There’s a whole bunch of them now, and they’ve made Lee Child a big name in thriller writing. I’ve read quite a few, and mainly enjoyed them, though a couple had violence that verged on torture porn, a little too graphic for my taste. Performed by the bad guys, of course, not by Reacher. Though he’s very comfortable with violence, Reacher’s no sadist.
In fact, Reacher’s just about perfect – the guy that every guy wants to be, and every girl wants to go to bed with (even if he looks nothing like Tom Cruise). He’s a loner, travelling the US on a whim, never staying long anywhere. No commitments, no responsibilities, no phone. An ex-military police investigator, living off the grid and loving it. The guy doesn’t even carry a suitcase: he wears the same clothes for three days, then throws them away and buys a new outfit.
Living the dream indeed.
He’s unbeatable in a fight, smarter than everyone else in the room, a crack shot, and an amateur psychologist who can figure out any bad guy’s motivations and movements, thereby solving any crime – the perfect man. Whatever the situation, he always knows exactly what to do. He’s what writers call “a Mary Sue” – that character so beloved of his or her author that he’s given no flaws. He’s the embodiment of what the author would like to be, perfect in every way.
After a few books Reacher’s perfection can become a little tiresome, but the individual novels rattle along at such a pace there’s no time to do anything but strap in and enjoy the ride, and One Shot’s no exception.
It’s written in a spare, no-nonsense style, very heavy on detail, but nothing flowery. Just the facts, ma’am. The first sentence is typically brief. It’s simply:
“Friday.”
I’m always interested in first sentences. They don’t come any shorter than this! The next sentence builds a little on this, adding one more piece of detail. Then the next builds on the piece before:
“Friday. Five o’clock in the afternoon. Maybe the hardest time to move unobserved through a city.”
The whole book is like this, with details – lots and lots of details! – accumulating on each other to form pictures. And you go along with it, accepting the overload, because the pictures Child is building are intriguing. Already by the third sentence you know someone’s up to no good. Why is someone trying to move through the city unobserved?
Here’s another example from later in the first scene:
“He opened the minivan’s sliding rear door and leaned inside and unfolded a blanket and revealed the rifle. It was a Springfield MIA Super Match autoloader, American walnut stock, heavy premium barrel, ten shot box magazine, chambered for the .308.”
The rest of this paragraph continues with the gun’s history, its uses, accuracy, and the type of ammunition it’s loaded with. So much detail might be boring, except you already know this gun’s out of place. The shooter is a sniper in a parking station. So you read on, anxious to find out what happens, knowing it can’t be good.
The detail compels you to trust the narrator – he knows so much about guns, he’s giving you all these facts. He has authority. So you settle into the story, feeling you’re in safe hands.
And whatever you think about the improbability of Reacher’s character, you can trust Child to spin a good yarn. As shown by those opening sentences, he knows how to snag the reader’s interest, and then hold it.
Our mystery sniper shoots down five civilians seemingly at random, leaving so much evidence behind that the police soon have a suspect in custody. And that’s where Reacher comes in: though the suspect refuses otherwise to talk, he asks his defence to get Reacher.
Which raises an interesting conundrum. Why does he ask for Reacher when Reacher is one of the few people in the world who knows he’s committed an almost identical crime once before?
The answer to this riddle leads Reacher through a story full of fascinating twists and turns. A great read if you like your thrillers to keep you eagerly turning the pages and your heroes to be … well, perfect. (And not at all like Tom Cruise.)
Stay tuned for the second day of Christmas and Two Boys Kissing by David Levithan.

Hope you had a fabulous Christmas!