The Twelve Reads of Christmas: 12th of Never by James Patterson and Maxine Paetro

By Marina | January 9, 2014 - 5:57 pm |December 11, 2014 reviews, The Twelve Reads of Christmas
On the twelfth day of Christmas, my true love read to me: 12th of Never, 11 Birthdays, Ten Big Ones, Nine Parts of Desire, When Eight Bells Toll, The 7 Habits of Highly Effective People, The Six Sacred Stones, Five on a Treasure Island, The 4-Hour Work Week, Three Wishes, Two Boys Kissing and One Shotin a pear tree.
Today, for the final book in The Twelve Reads of Christmas series, I’m reviewing 12thof Never by James Patterson and Maxine Paetro.

This is the latest in The Women’s Murder Club series. I haven’t read any of the others but, as with Ten Big Ones, it didn’t seem to matter. Like the Stephanie Plum series, you don’t need all the backstory to follow what’s going on.
And what’s going on caught my interest early on by opening with a woman in labour. She’s all alone at home in the middle of a violent storm and the power’s out. I was standing in the bookshop reading this scene and I had to buy the book to find out what happened!
Fortunately the baby arrives safely, and the new mum turns out to be detective Lindsay Boxer, who soon has several problems on her hands, both personal and professional. Her three friends, Yuki the lawyer, Claire the medical examiner and Cindy the reporter, also have problems, some of them related to Lindsay’s. Claire, for instance, is demoted after a murder victim goes missing from the morgue.
The missing body is only one case Lindsay’s working on. Others include a professor who keeps giving the police detailed descriptions of murders which then happen as described, and a serial killer who’s just woken from a two-year coma, who wants to tell Lindsay and only Lindsay where the bodies are buried.
There’s a lot going on in this novel. To add to the frantic pace, each short scene is a chapter in itself. And I mean short – 500 to 600 words at most. You feel like you’re rushing through, just hitting the highlights of a scene, and then it’s over and you’re rushing off to something else.
It certainly made for a quick, if rather breathless, read. I was quite intrigued to see how some of the plotlines – particularly the one involving the prescient professor – would pan out. A couple of times I was surprised, but other times the “big reveal” seemed blindingly obvious.
The four female friends didn’t have a lot to do with each other in the story. I got the impression from the series name that they would be working together to solve a mystery, using their complementary skills. Perhaps they have done so in earlier books, but here the focus was mainly on Lindsay, whose sections were the only ones written in first person, which made her seem like the main character, and everyone else revolved around her. There was a bit of a sameness to the characters which made it harder to remember who was who and which bit of the story they were involved in as we raced through the plot.
It was an entertaining enough read, but it didn’t make me want to rush out and buy the other eleven. 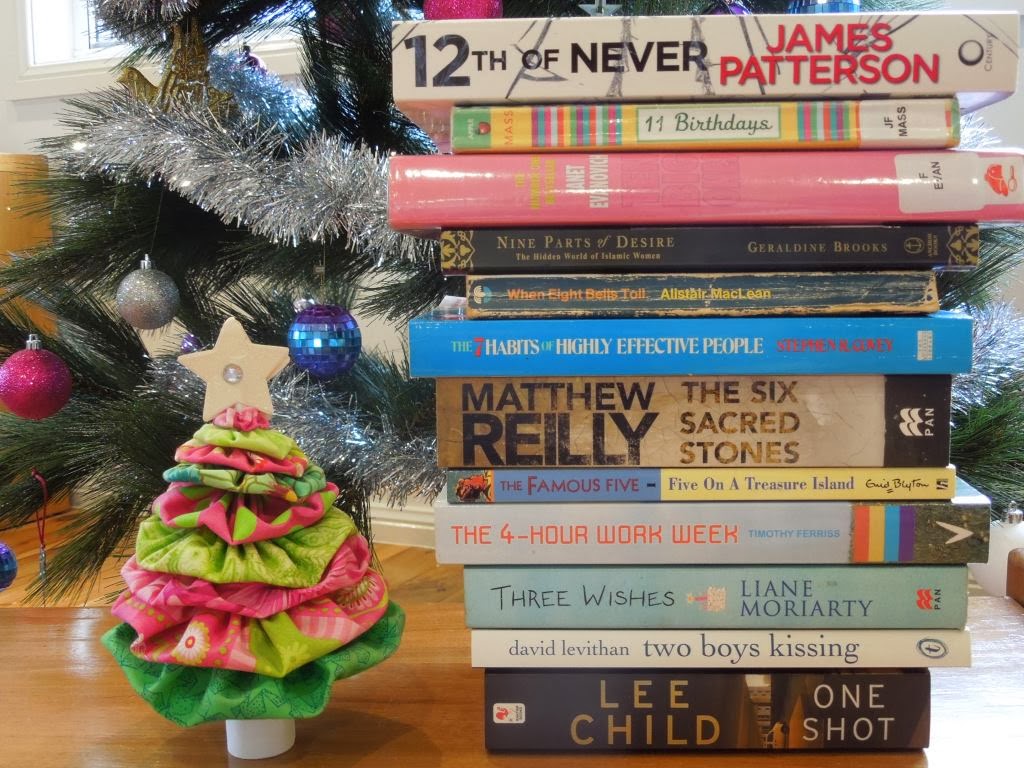 And that’s it for The Twelve Reads of Christmas. Phew! Now I can read a book that doesn’t have a number in the title. Hope you enjoyed the series.

2 Responses to The Twelve Reads of Christmas: 12th of Never by James Patterson and Maxine Paetro