Review of The Edge of the Woods by Ceinwen Langley 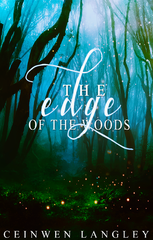 On Emma’s fifth birthday, she and Mama picnic in the meadow near the village. It’s an idyllic scene, surrounded by wildflowers and dancing fireflies – until Emma strays too close to the woods and earns a smack and a stern warning. No one goes near the woods. Young girls who do have been known to disappear in the middle of the night.
But when Mama falls asleep, the fireflies lead Emma to a strange young boy making music in the woods.
By the time Emma turns seventeen she thinks the boy in the woods was just a dream. Now she’s more concerned with the very real dilemma facing her. Everyone must marry at eighteen or face a life of poverty and being shunned by the villagers. For the girls of this sexist society, it’s marriage or nothing: “Almost every adult in the village is referred to by their job, and for the women that means ‘wife’.” The problem is, there are only two boys turning eighteen, and four girls, and all the girls have more money and social standing than Emma and her widowed mother.
The village is well and truly under the thumb of the mayor, whose son is one of the available boys. The mayor is one of those people who use the rules of their religion as a weapon to control everyone else, instead of embracing its actual teachings as the compassionate and principled Emma does.
Two such opposite people are bound to clash, and at first it seems as though the mayor has all the advantages on his side. But Emma has love – the love of her mother, of her outcast friend, even of the mysterious boy in the woods – and love can be a great force for good.
This isn’t an epic story with great magics and kingdoms at stake, but Langley will have you caring very much for the fate of Emma and her little world. Her characters are real people facing difficult decisions. Some of Emma’s choices are particularly hard as they affect not only her own life but the fate of her beloved mother, and I really like that about this book. Parents are often conveniently absent in YA books, leaving the heroine free to pursue whatever excitement and/or romance she wishes without consequence, which is very unrealistic.
There is a romance, but it’s only one aspect of Emma’s life, not the be-all and end-all. Langley shows that other kinds of love are just as important, and that it’s the ties that bind us to our families, the promises we make to our friends, that really make us who we are. Emma is a strong character and a great role model. She’s tempted by the easy path, she’s almost seduced by magic, but in the end she remains true to her values and finds a way forward not only for herself but her whole community.
And what is in the woods? Perhaps not what you might expect – or, if you’ve read some of the older, darker fairy tales, perhaps it is. I was very glad there were no easy answers waiting for Emma under the trees. I enjoyed The Edge of the Woods very much. It has a very likeable heroine, a little magic and a lot of heart.