Well, the holidays are well and truly over, and we’ve gone back to all our usual activities, including taekwondo. At the end of last year, the girls and I moved up to high yellow belts. One of the black belts made taekwondo gingerbread men for everyone in celebration. Ninjabread men? She went to a lot of trouble. They had white taekwondo uniforms on and everyone got the appropriate coloured belt for their grade. So cute! 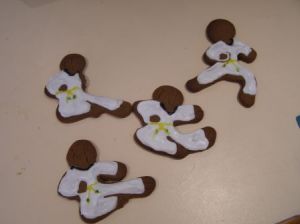 Sadly, Baby Duck is still languishing among the white belts, two grades behind us.

Baby Duck has a lovely nature, very caring and sensitive. Sure, he can be loud at times, and is certainly not above whacking his sisters when the provocation is great, but on the whole he’s a gentle, laid-back little dude. He just doesn’t get taekwondo.

At our school the sparring is non-contact, ie you’re supposed to stop short of actually punching or kicking anyone. Of course sometimes a foot or hand will connect accidentally (particularly among the younger practitioners!), and when it happens to Baby Duck he’s outraged.

“He kicked me!” he announces to the world in horrified tones.

You’d think he’d realise, from all those ninja cartoons he watches, that that’s the whole point of martial arts.

Most of the time, however, he’s quite safe since he allows a good ten-foot margin between him and his opponent at all times. I was trying to spar against him at our last lesson, and every time I kicked he fell back ten feet, then retreated another five feet before delivering his return kick. I tried to persuade him that he’s never going to defeat an opponent by standing on the opposite side of the hall, but I don’t know whether he bought my arguments.

Of course I’m happy that he’s such a sweet kid, and I don’t want to change him, but, you know, just a little more aggression would be helpful. He thinks the best part of taekwondo is chatting to his friends when they’re supposed to be learning their forms, hence the form is still pretty wobbly. Watching him go through his form is like watching a marionette. He’s all floppy and gangly. At this rate he could be a white belt forever, which wouldn’t go down well.

I instituted an incentive scheme, thinking to appeal to his greed. $30 for every grading! The girls have earned 60 bucks apiece already, which brings on tears when they get paid and he gets nothing, but doesn’t translate into motivation. Maybe I just have to wait for him to grow up a little more.

It’s ironic, though – the whole reason we started taekwondo was to find him a sport he’d enjoy. Yet he really couldn’t care less, and it’s Demon Duck and I who are keen. Demon Duck has a phenomenal memory. Show her a form once and she’s got it. She’s a good little sparrer too. I’ll have to work hard to keep up with her. Don’t want her beating me to black belt – although that’s a distant goal at the moment. I’d settle for just being able to do a side kick without losing my balance!