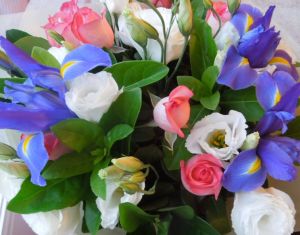 Happiness is being reminded what a great guy you married.

Being an old married couple, the Carnivore and I haven’t celebrated Valentines Day in years. It’s too commercial, we don’t need a special day to say “I love you” – the usual reasons. Occasionally we might give each other a card if we happen across one that’s insulting enough (I was tempted this year by one that said They say opposites attract. Happy Valentines Day from your intelligent, beautiful and amusing wife) but usually the day slips past with no acknowledgement.

This year at the girls’ school they had a scheme whereby, for the princely sum of $2, you could buy a rose for a friend and have it delivered during roll call. There was much excitement and planning of who was buying roses for whom. All would have been well, except they underestimated the number of people wishing to buy roses.

Demon Duck came home devastated. She’d managed to order a rose for her new best friend, but they’d run out before the friend could get her one in return.

“I’m not going to get a rose on Valentines Day!” she wailed.

You might imagine this wouldn’t be too much of a problem, since she’s never received a rose on Valentines Day any other year either, and managed to live through the experience. But she was really quite disappointed. Briefly I toyed with the idea of buying her a rose myself, but a) roses are hideously expensive on Valentines Day and b) I’m a cheapskate, so that idea didn’t fly.

I decided to do something more in the original spirit of the day. I gave each family member four red paper hearts and told them to write a loving message for each other member of the family. We sealed each person’s messages in an envelope to be opened and read out at dinner on Valentines Day, so we could all hear the nice things we’d said to each other.

Satisified that Something Was Being Done about Valentines Day, I thought no more of it, and was taken completely by surprise when I came out for breakfast on the day and found this: 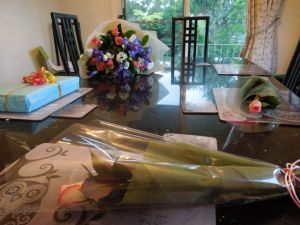 The Valentines Day fairy had been and left me a beautiful bunch of flowers, a single rose for each girl, and a beautifully wrapped present for Baby Duck (which of course turned out to be a box of lego).

Demon Duck was thrilled that she got her rose after all, and I was touched that her thoughtful daddy had taken in all the lamentations on the subject and decided to do something about it. It was such a sweet surprise. He’s so sneaky! And obviously not as much of a cheapskate as his wife. I think I shall keep him.

As for the messages we wrote each other, they were a lot of fun too. Some members of the family cough cough demon duck cough couldn’t quite get the hang of being unreservedly nice, and had to get their snark on. For example, her note to her dad began “I love how you think you’re so funny even when you’re not”. Others, like Drama Duck, crammed whole heartfelt essays on to their little paper hearts.

Baby Duck’s note to me said “You are the awesomest mum in the whole known galaxy”. Can’t do much better than that, can you!

Hope you enjoyed it too, if Valentines Day is your thing. And if saying it with flowers doesn’t appeal, maybe next year you could take a leaf out of the Carnivore’s book and try saying it with lego instead. Guaranteed to make an impression on the small boys in your life.

One Response to Happiness is …