Hi there! We’ve just returned from a couple of weeks touring the north island of New Zealand. Very pretty place, lots to see – we didn’t even cover the whole north island, much less get a chance to see any of the south island.

I tortured the kids, as I did on our Japan trip last year, by making them keep travel diaries. There was much complaining, but I hope one day they’ll be glad to have them to look back on and help them remember. Baby Duck’s is often unintentionally entertaining, so I thought I’d share a few extracts.

15/1/13
Today we went to some café. Then we left, walked, and went to a park. [Ed: I hope you weren’t expecting actual useful details] But it started raining, so we went back to the hotel. But on the way there we were stopped by a bridge we had walked over that had gone up like this. 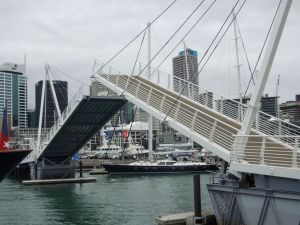 But the bridge lowered a little while later and we decided to take the SHARK-BUS to the Aquarium and set off yet again.

[Perhaps you can guess from the excited capital letters that the shark bus was pretty impressive to a certain nine-year-old tourist.]

When we got there the Aquarium looked really small but the person driving the SHARK-BUS told us the actual Aquarium was underground. [It was Kelly Tarlton’s Underwater World, and well worth a visit if you’re ever in Auckland.] There were rays, sharks, a giant squid that’s head was coming off so you could see its brians [very nasty, being able to see a creature’s brians, you know. Probably goes without saying that it was a dead giant squid], fish, jelly fish, shrimps, sea horses and a octopus and also some penguins.

[I shall spare you the regular descriptions of what he had for breakfast, lunch and dinner. He hasn’t quite got the hang yet of only including the salient points. Or maybe food is very important when you’re nine.] 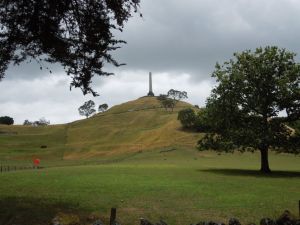 After One Tree Hill we went to a museum. It was boring.

[Are you sensing a pattern here? Yes, sadly, dear readers, Baby Duck has little appreciation for cultural experiences. Or sightseeing. Or shopping. Or pretty much anything you do when visiting a foreign country other than checking out its amusement parks.]

Then for dinner we had Mongolian [one of those restaurants where you select your own ingredients and they cook it in front of you on a big drum]. I liked how you could serve yourself.

17/1/13
After breakfast we went on a ferry to Devonport. Then we went on a harbour tour. The captain was very funny “Please don’t fall overboard because it creates lots of paperwork wether I find you or not”.

When we stopped at an island the captain said “If you hear this sound (HOONK) you’ll know to start walking back to the boat. But if you hear this sound (honk honk honk) you should have been running because you just missed the last boat back.” Since there were no houses at all nobody would want to sleep there. Dad got off the boat but got back at the last minute. [His timing gave me a few anxious moments …]

But when we got to dry land nobody started kissing the ground. (Well at least I didn’t see anyone doing it.) Then we went to Lord Nelson’s for dinner. [He didn’t mention the shopping that came in between, but I can assure you he found it boring.] When we got out we saw two girls get on the bungy ride across the road. I think it looked really fun, but mum and dad said “NO”. So that was decided.