D is for Determined

Everything’s relative, isn’t it? If I’m starving to death and you offer me boiled potatoes, I will wolf them down and think them the most delicious thing I’ve ever eaten. But if I’m accustomed to eating at five star restaurants every night, your boiled potato offering might seem plain and uninteresting, even offensive. Same boiled potato, different circumstances.

Demon Duck has many fine qualities, but some of them are definitely boiled potatoes. Take her determination, for instance. It gives her drive, it makes her see projects through – it will probably take her far in life. A great quality to have, yes?

But the other face of determination is stubbornness, and the child will argue till her last breath when she’s set on something. When you are the parent of a determined child, that fine quality can seem like nothing more than a humungous pain in the butt. And when you add high intelligence to the determination, what do you get?

I tell you, this kid’s teenage years are going to give me more grey hairs than the other two combined.

She started asking me months ago about getting her hair dyed. I said no, and gave her all the reasons: bad for your hair, have to keep doing it once you start to cover the regrowth, too expensive. She accepted that and didn’t nag, but every now and then she’d mention how much she’d like to dye her hair that really bright fake red.

Meanwhile she pondered ways and means, never letting go of the idea.

Enter the World’s Greatest Shave, a fundraiser for the Leukaemia Foundation. Several girls at school were signing up to shave their heads, raising money for the foundation through sponsorships. But if you didn’t want to shave your head, you could still raise money by pledging to dye your hair a crazy colour, like … oh, I don’t know … bright red.

You can see where this is going, can’t you?

I had to laugh, really, but I wasn’t going to be a pushover. No hitting on her grandparents for ten bucks and calling the job done. I said she could do it if she raised at least $100 (though only with a temporary dye that would wash out after a few washes).

Not being terribly outgoing, she was quietly horrified at the prospect of asking people for donations, so we came up with the idea of making friendship bracelets for her to sell to the girls at school. 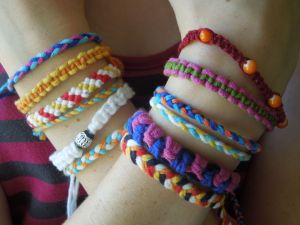 Here’s just a few of our creations. We’ve each made about 30, and Drama Duck made a handful too. I’ve spent so much time making friendship bracelets lately it would have been easier to just give her the money, and almost as cheap, considering how much I’ve spent on cotton and beads. But I think it’s a valuable experience for her, having to work to achieve her goal, and she’s certainly put in a lot of effort. So far she’s raised $66, and still going strong.

D is for Determined Demon Duck.

2 Responses to D is for Determined