G is for Green

In A Fantasy Alphabet, G is for Green by Jay Lake. 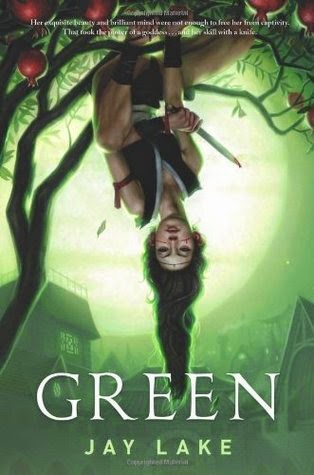 I have to admit, my interest was piqued almost as much by the negative reviews I’d seen as by the blurb of this one. So there’s proof for worried authors – even bad reviews can sell books! Since people have varied tastes, one reader’s reason for disliking a book may be exactly what someone else is looking for.

In this case, several people complained of the structure of the novel, others didn’t like the protagonist, while still others bemoaned the sado-masochism. Okay, there may have been a touch of that, but that person who complained of “bestiality”? That word – I do not think it means what you think it means, to quote Inigo Montoya. I didn’t hear any cries of “bestiality!” about the movie Avatar when the hero got it on with the pretty blue lady with the tail. In fantasy, possession of a tail doesn’t necessarily make you a “beast”.

However – moving on! Green is the story of a girl sold into slavery as a very small child and raised to be the concubine of a tyrant, and how she manages to wrest her destiny back from the control of others. “Green” is the name she gives herself when her owner names her “Emerald”, as she refuses to accept his label but has been addressed simply as “Girl” so long she’s forgotten her own name.

This is typical of her fighting spirit. Though she loses most of her native tongue and retains only the barest memories of home, she is determined to get back there. She is ruthless and single-minded, and despite all the punishment a harsh system throws at her, she never lets go of her defiance and purpose. It is ironic that those who have enslaved her are actually creating the means of their own downfall in the skills they beat into her.

I had to take a couple of runs at this one. What I expected would be the plot for the whole novel came to a sudden climax about a third of the way through. Then it seemed a whole new story started as Green moved to a different continent where she met completely new characters and developed new story goals. It was oddly unsatisfying, and I stalled there on the first read. So those reviews complaining of the structure did have something of a point.

But the writing was good and the themes interesting, so I gave it another go a few months later, and found that the story did eventually circle back around to where it started, and what had seemed a little disjointed and episodic in fact was not. You have to trust Lake on this one. He’s not a formulaic writer, but he does produce a satisfying ending to an interesting story if you stick around for the whole ride. Worth persevering with.