E is for Elantris: Review of Elantris by Brandon Sanderson

By Marina | May 1, 2014 - 2:54 pm |December 11, 2014 A Fantasy Alphabet, reviews
Today in my book review series A Fantasy Alphabet I’m looking at Elantris, the debut novel from prolific writer Brandon Sanderson. 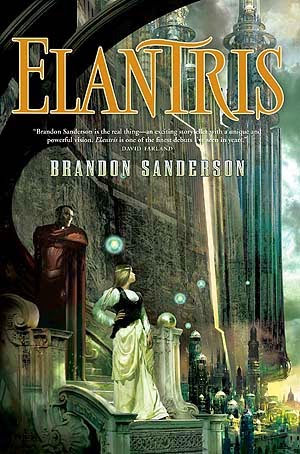 It’s hard to believe this book was only published in 2005. Brandon Sanderson has become a huge name in the sff world since then, deservedly so in my opinion, and he has more books out than many authors who started years before him. It feels like he’s been around forever.
And some of those suckers are big – his latest, Words of Radiance, comes in at a whopping 400,000 words. So he’s certainly worked hard to get to where he is today at the top of the sff heap.
Elantris is a lot smaller than that, though still fairly meaty for a first novel, and it shows the great flair for worldbuilding that has been a large part of his success. Not that he’s not good at everything else – his plots are interesting, his characters well-realised – but it’s his worldbuilding that really stands out for me. You always know you’re going to get a really cool magic system or society in a Sanderson world, and Elantris is no exception.
The city of Elantris was once a place of wonder, inhabited by silver-skinned, god-like people. These people had once been ordinary folk, but they’d all been blessed by a random transformation that came upon them in the night. New Elantrians gave up their old life and moved to Elantris to live in bliss for eternity.
But ten years ago something went wrong, and the transformation became a sickly curse, and the power of Elantris was lost. At the beginning of the novel, Raoden, the crown prince of the neighbouring city, suddenly becomes an Elantrian, and is hurled into what is now the nightmare world of Elantris, where people exist in eternal suffering and eventually go mad.
Talk about bad timing – his fiancee, a foreign princess who he’s never met but is kind of half in love with already from their correspondence, arrives for their wedding a few days later. Poor Sarene is met with the news that her fiancee is dead, but the betrothal is nevertheless binding, so now she’s a widow in a strange city.
And it is a strange city – Raoden’s father’s only been on the throne ten years, since the revolution when Elantris fell. No one’s happy, especially not with a neighbouring country threatening war or at the least forcible conversion to their dark god. The priest Hrathen arrives to try to convert the city, and at first he seems the stereotypical “evil priest” bad guy, but there’s a lot more to him than that.
These three characters – Raoden, Sarene and Hrathen –  share the narration, and the way their stories wind around each other and ultimately collide is very well done. There’s a lot of depth to the characters, particularly Hrathen, who is the most nuanced antagonist I’ve seen in a long time. He’s not really a “bad guy” at all, just a person with a different agenda to the two protagonists.
Raoden seeks answers to his personal problems and those of his country in researching the ancient magic system of Elantris. In the process he discovers what caused the problem ten years ago and how to fix it, in a race-against-time climax that occurs as his country is invaded. The answer is very clever.
There’s a lot happening in this book – magic, romance, human relationships and their dilemmas, humour, drama and mystery – and it makes for a satisfying read. It’s like a whole three-volume fantasy saga packed into one exciting volume. If you haven’t read Sanderson before, this is a good place to start. Highly recommended.