D is for Divergent: Review of Divergent by Veronica Roth

By Marina | April 2, 2014 - 10:31 am |December 11, 2014 A Fantasy Alphabet, reviews
Before we begin, I have a confession to make: despite knowing full well the difference between fantasy (Magic! Wizards! Mythical beasts! Cool stuff!) and science fiction (Strange futures! Aliens! Space! Scientific cool stuff!), I seem to have stuffed up.
A Fantasy Alphabet, despite being only four books long so far, includes two books (Arclight and Divergent) which aren’t actually fantasy. They’re both dystopian sci fi. What can I say? My brain went on holidays and never came back, apparently.
However, since “A Fantasy Alphabet Which Occasionally Includes Books That Are Really Science Fiction” doesn’t have quite the same ring to it, I’m sticking with “A Fantasy Alphabet”. I was so keen to read Divergent that I don’t care.
So.
Today in my book review series A Fantasy Alphabet, I’m looking at Divergent by Veronica Roth. WARNING: May Contain Traces of Science Fiction. Ahem. 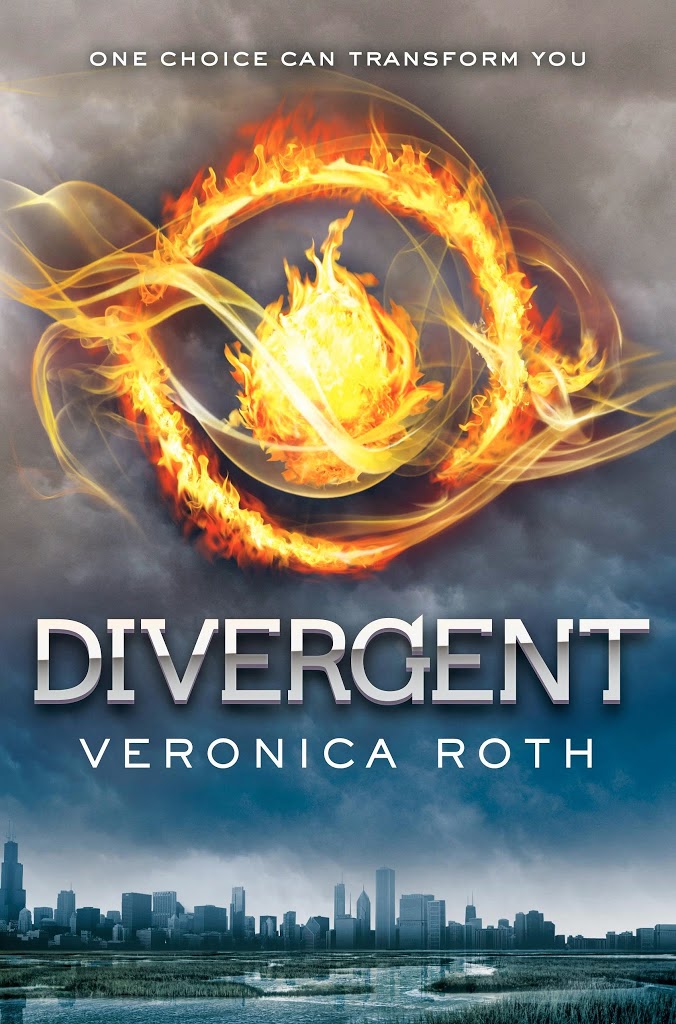 Divergent is the story of sixteen-year-old Tris, who is about to face the big rite of passage of her society. The people of her world live segregated into five factions with very different outlooks on life: Abnegation, Erudite, Dauntless, Amity and Candor. At sixteen, you must choose which faction you will live with for the rest of your life, and if it’s not the same as that of the family you grew up in, then bye-bye family.
So when Tris leaves her Abnegation family for Dauntless, that seems like a big enough wrench. But her new life is complicated by the fact that she doesn’t actually fit Dauntless either. In fact her test results showed she is Divergent, ie not fitting in any one faction, but showing traits of all of them. But that’s a secret she mustn’t reveal, because people who are Divergent tend to wind up dead.
Only something strange seems to be going on over at Dauntless, and maybe Tris isn’t the only one in danger. The whole society is teetering on the brink of disaster, and Tris may be the only one who can save it …
I could see right away why they would want to make a movie of this novel. I mean, apart from the whole let’s cash in on the latest YA blockbusterthing. It has great visuals – the five factions, who all dress and behave differently, the shattered city they live in, the many stunts the Dauntless daredevils pull – scenes of ziplining off the top of skyscrapers, or climbing giant ferris wheels. Plus the many virtual reality scenes where the Dauntless initiates have to face their fears. It’ll be great fun to watch.
It was fun to read too. Like Arclight – it seems to be the fashion for this type of novel – it’s written in first person present tense, so it has that sense of immediacy and urgency about it. The reader is riding on Tris’s shoulder, experiencing everything as she does.
And of course that “everything” includes a first kiss, with a dark and brooding hero named Four. And – wonder of wonders! – only Four. There is no love triangle, which is not only a refreshing change for YA, but a much more satisfying relationship as far as I’m concerned.
It’s an interesting world, with the different factions and their political manoeuvring. Though if I was going to quibble, I’d have to say the idea of people slotted into rigid factions is the least convincing thing about the book. It makes for a great story, and provides a good way to separate the young heroine from any parental support, and I was perfectly happy to go along with it for the sake of being entertained – but it doesn’t hold up well to scrutiny.
People just don’t fit into such neat boxes in reality. No one is all one thing or another. The idea that there must be something weird or “divergent” about someone who can be friendly and brave and clever and truthful and self-sacrificing instead of just one of them doesn’t jibe with what humans are really like.
Roth takes a couple of other liberties with reality too – Tris seems to grow new muscles after only a week of training, and learns to fight pretty quickly too. The baddies are pretty much unremittingly evil, in a rather over-the-top way. But Tris and Four are well-drawn, and their romance, with all its teenage uncertainties and complications, is nicely realistic.
Overall, it’s a satisfying story. I can certainly see the attraction for the teenaged market – a fascinating world, a gutsy heroine trying to save it, and an appealing romance. And you certainly don’t have to be a teenager to enjoy those things! Just don’t look too closely at the premise of the worldbuilding and go along for the ride, and you’ll be rewarded with some entertaining storytelling.