Developing a sense of humour 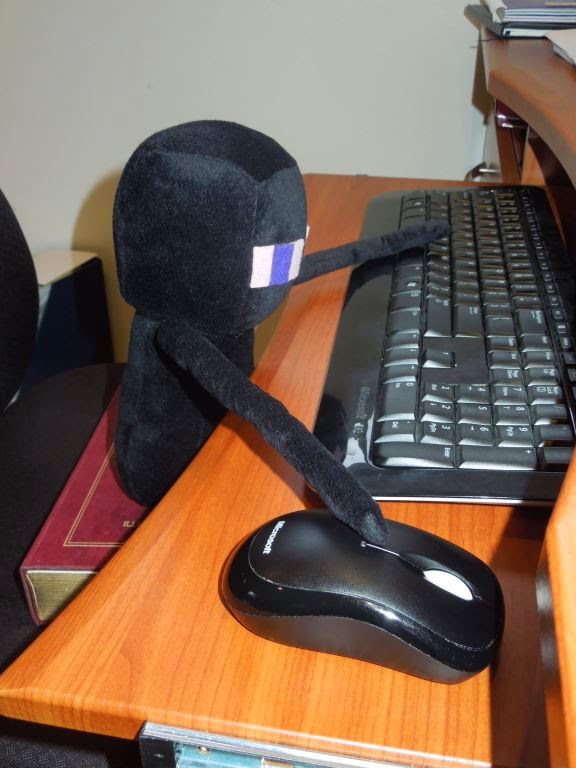 I came upstairs to use my computer one day and found someone was there before me. This little Ender Man obviously had a burning desire to play Minecraft. Either that or Baby Duck has a very silly sense of humour.
I didn’t say anything, just moved the Ender Man. I set him up in front of the TV, remote control in hand and 3D glasses on (do you know how hard it is to put a pair of glasses on something that has no ears or nose??). When Baby Duck came to see what I thought of his surprise he was highly amused.
That kid makes me laugh. He has quite a dry wit. Watching kids grow and develop is fascinating in many ways, and the development of a sense of humour is one of them. When they’re little they often make you laugh, but at that stage it’s unintentional (and often at their expense). By the time they start school they’re trying very hard to get a handle on how jokes work, and often failing in hilarious ways.
Demon Duck’s first attempt to make up a joke was:
Q: Why did the chicken knit a scarf?
A: To keep her eggs warm.
We still laugh about that one. The poor baby couldn’t understand why her joke wasn’t funny. By age 7 or 8 they understand what makes a joke funny, and can retell ones they’ve heard, but it’s not till about 9 or 10 that they start to come up with original situational humour.
One recent Saturday morning, Drama Duck, who is not a morning person, was flopping around on a couch resisting all efforts to get her moving. I asked her several times to get up and have breakfast, but groans were my only reply.
Her brother gave her a withering look.
“Have breakfast,” he advised. “It’s brain food. You need it.”