Crimes against the English language

Driving into the city last week I passed a building which housed a kitchen renovation company. Biggest range!! said one sign. DIY or we instal! said another. Then there was the sign, in really big lettering, which they clearly felt was their greatest selling point.

I could picture the brainstorming that must have gone on for the creation of that slogan.

“How about we make it easy?” says the first advertising guy.

“Well, what about we make it simple then?”

“Hmmm. I’m not feeling it. We need something, I dunno, that combines ‘simple’ and ‘easy’.”

Deep thought for a moment.

Talk about diluting your message. “We make it easy” isn’t the most original slogan but at least it has punch. “We just simply make it easy” – not so much. My editor’s soul was itching to rip the useless weasel words right out of there. Lucky I didn’t have a red pen with me, or who knows what might have happened.

It was a day for noticing signs. Further along the road was a branch of a shop that has me shaking my head every time I see it. I can’t decide whether the people who named it have no imagination or they’re deliberately making a very gross pun to make their shop memorable. Maybe there’s just something wrong with my imagination, and other people don’t start thinking about the wrong kind of stools the minute they see a perfectly innocent sign.

What do you think? Would you call your shop The Stool Shop? Even if you were selling stools?

Then there’s Baby Duck. He’s making great progress with his reading this year, but his spelling is still in that adorable phonetic stage little kids go through. His seems more extreme than I remember the girls’ being, though. Often I have to ask him to translate for me.

For instance, he wrote and illustrated a new story this week. The title was “A Gient Giniypig”. Easy enough with the picture of a King Kong-sized guinea pig standing on top of a building fighting off planes. But I needed help with the writing on the bottom of the front cover:

Even with his name there I couldn’t pick it. Apparently it says “authored and illustrated by [Baby Duck]”. Silly me.

At Easter he gave me a present he’d made at school. There was a tag attached with my name written on it. I don’t think I’ve ever seen a misspelling of “Marina” before. You spell it just like it sounds, and most people are familiar with it anyway from boat parking lots.

This is so cute I think I’ll laminate it and keep it forever as a bookmark. Every time I look at it it makes me smile. 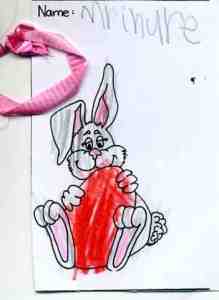 Now I shall take off my editor hat and show you what I’m working on sewing-wise at the moment. Hey, it’s Wednesday, and I’ve always wanted to do a “Work-in-Progress Wednesday” post, but selections of my deathless prose from the interminable Man Bites Dog revision just don’t seem interesting enough. 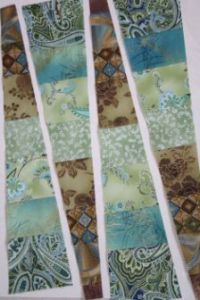 Can you guess what it’s going to be? 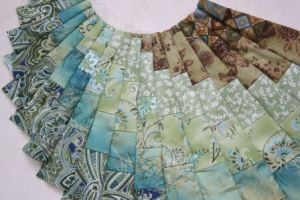 No? Hopefully next week I can show you the finished thing. I promised my quilting group I’d have it finished by our next meeting, so that will give me some motivation to get on with it. I’m also working on another sock monkey. I got a bit carried away with the stuffing, though, so he’s turning out to be a very chunky monkey. Baby Duck insists I give this one googly eyes, so he could also be a rather scary-looking monkey.

Or as Baby Duck would say, “a scerey looking muker”.

4 Responses to Crimes against the English language