Some people – often people of the male persuasion – suggest that quilters are all mad. They take some perfectly good bits of fabric, cut them into little tiny pieces, and sew them back together again.

So how’s this for a really crazy idea: let’s vandalise a perfectly good pair of socks. 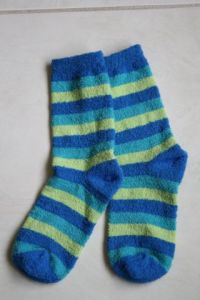 Aren’t they pretty? So warm and snuggly-looking too. I was almost moved to spare them. My toes would have liked to get better acquainted. But no. They had a higher purpose to fulfil.
I hacked into them with my trusty scissors. Four hours, a pile of toy filling, and many pricked fingers later, I had this:

How cute is he?? Apparently sock monkeys are a childhood fixture in America, but I’d never heard of them till I came across some sweet little ones on Kellie Wulfsohn’s blog. Then I found this great tutorial on how to make them so I thought I’d give it a whirl.
Can you guess what my problem is now?
That’s right. I have three children. And only one sock monkey. Thinking of all those dreadful pinprick injuries I had sustained in the making of Monkey One, I suggested to Drama Duck that she might be too old for a sock monkey toy.
Apparently not.

The sacrifices we mothers have to make for our children! Stay tuned for Monkeys Two and Three to join the tribe. Herd? Troop? What is the collective noun for monkeys? In this case, perhaps a cuddle of monkeys. Or a cuteness. In fact, he’s so cute I might need one for myself.

Look out, socks! I have scissors and I’m not afraid to use them …

2 Responses to Monkeying around