On holidays recently, the Carnivore was cooking bacon for breakfast on the balcony when a whole host of interested parties turned up to supervise the process and loudly demand a share. Who could blame them? Nothing beats the smell of bacon cooking! 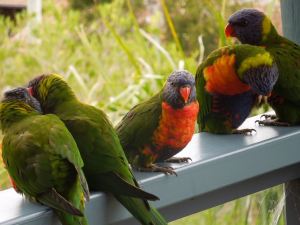 Naturally the Carnivore refused to part with any of his breakfast – this man takes meat seriously. That didn’t stop the raucous squawking. There must have been thirty of them. Believe me, thirty rainbow lorikeets make a lot of noise.

Pretty little beggars, aren’t they? We shooed them away repeatedly, but they kept coming back, at least till the bacon was gone. Clearly this was a regular gig for them. 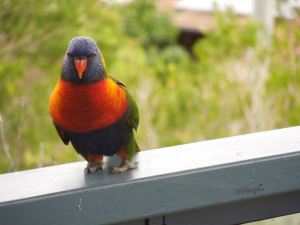 Some people do encourage them, feeding them bread and other things that are bad for them. We were good and hardened our hearts, except for one member of our party, who offered a single piece of bread to see if he could get one of them to feed from his hand. 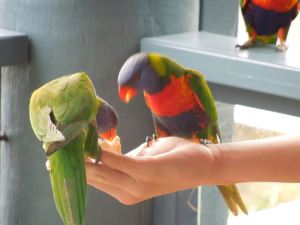 No problem! If he’d had a bigger hand, there would have been even more willing to oblige. They were fighting for landing space.

And the views from that balcony? 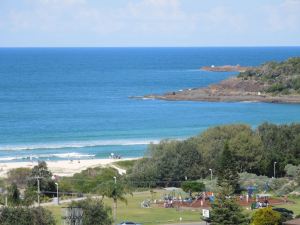 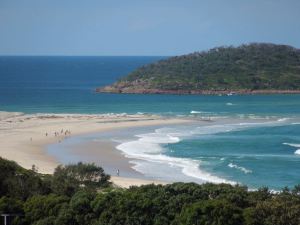 Lucky rainbow lorikeets, that get to live there all the time!

And now I shall put on my English nerd hat: While writing this post it occurred to me how strange it is that “beggar” is spelled with an “ar”. The verb is to beg, and the person (or, in this case, bird) who does it is a beggar. But every other word constructed like this that I can think of ends in “er”: rider, runner, walker, keeper, scorer, chaser, drinker, shooter, killer, knitter, builder, etc, etc.

Damn, but the English language is a squirrelly beast. Can anyone think of any other words that use the “ar” construction? 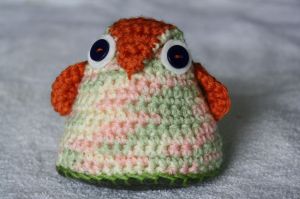 I know what you’re thinking. You don’t have to name the owl, Marina. It’s just a stuffed toy. And it doesn’t even look like an owl.

I know you’re right, but he’s just sitting on my desk staring at me, all vague and nameless. Sad, unloved and nameless. Accusing, almost. What kind of mother are you? If you really cared you’d give me a name. And stop letting people say I don’t look like an owl.

Sorry, buster, you really don’t look like an owl. The original did, but I think I overstuffed you. You look more like a sparrow with a really big butt. Maybe an overweight robin.

Hey, I could call him Robin. Robin the Owl. 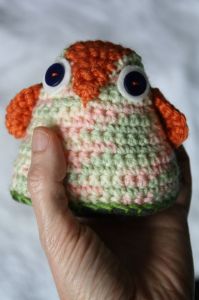 May the 4th be with you.

I have no reason for posting today other than a wish to make you all groan at the terrible lameness of that pun. I promise a real post soon, but how could I resist? It’s a once-a-year opportunity.

Tomorrow serious I will be, my young jedis.

I love the instruction manual for my laminator. I read it every time I use the laminator, because the expressions in it always make me smile. “In order to avoid crispation, please don’t insert the open side of the pouch into the laminator first”. “Crispation” is such an evocative word, it should be a real one. “Please re-laminate if the lamination is not very well for the first time”. After “accomplishment of lamination”, “book, file or other heavy things can make it more flat and good-looking”.

“As to the smutch on the covers of machine, please wipe them off by wet cloth.” “To avoid the danger of distance creepage, please don’t place the machine in wet conditions”. That last one’s got me. I wonder what they mean by “distance creepage”? I picture some poor guy sitting there with his Chinese-English dictionary scratching his head as he searches for the right word.

I take my hat off to him. His English is a hell of a lot better than my Chinese. I still find it amusing, though.

Picking the right word is often difficult, even in your native language. Roget would have been out of a job otherwise. I bet I’d be a rich woman if I had a dollar for every time a writer agonised over a word choice. Creep or sneak? Blue or azure?

So many words mean almost the same thing – but not quite. If you call a talkative character garrulous you project a very different image than if you say they’re chatty. And is she a female or a girl, broad, sheila, gal, lady, chick or woman?

The nuances of word choice are a great tool for a writer. I’m still learning to adapt my word choices to my point of view character. Clearly a Harvard professor has a different vocabulary to a five-year-old, or an old lady or a migrant fruit-picker. In direct speech I’ve always tried to show such differences. But until a year ago or so my brain hadn’t quite cottoned on to the fact that the rest of the narration should also show these differences if I was really deeply in the character’s point of view. My general narration tended to sound like me.

You’d think with all the books I’ve read that this would have been a no-brainer, but no. Finally someone hit me with the clue stick, and it’s improved my writing, though it’s still something I have to work at. Particularly when the differences between characters are not so obvious as Harvard professor versus five-year-old. It’s a bit harder to show the differences between three career women of similar age, say, or a group of kids who go to the same school. Or, in my case, a group of blood mages. I keep trying, though, because those books where all the characters sound exactly the same annoy me, and I don’t want to write one myself!

Of course it’s easier if one or more characters has a distinctive way of speaking. Maybe I need a character who sounds like my laminator manual.

“Caution, when dragon is in nearness – avoid crispation!”

Drama Duck was reading a book about sharks1 to Baby Duck last night for his bedtime story. She’s an advanced reader for her age but she tends to slide over unfamiliar words instead of stopping and trying to figure them out.

I could hear her from the next room, her voice full of expression:

“The average hammerhead shark is about eleven feet long. It is easily identified by its superwide head. The hammerhead’s eyes are at either end of its head, giving it great binocular vision. Hammerheads eat fish, squid, octopuses, cri-Christians and other sharks.”

After a moment’s thought I realised that the word she’d stumbled on must be “crustaceans”. I suppose it is a tricky one. Christians of the world can breathe a sigh of relief, knowing that they’re no more likely to become a shark’s lunch than the Buddhists, Muslims, aetheists and everybody else after all.