A is for Arclight: Review of Arclight by Josin L McQuein

By Marina | January 26, 2014 - 9:16 pm |December 11, 2014 A Fantasy Alphabet, reviews, self-publishing
Welcome to my new book review project: A Fantasy Alphabet. Note that that is “A” Fantasy Alphabet, not “The” Fantasy Alphabet. I’m not suggesting some definitive list of fantasy books here, merely wending my way through the alphabet choosing, in the main, current fantasy novels that I’m eager to read. (Though I’m not promising they’ll all be new. A few old favourites may sneak in, particularly with some of the more difficult letters!)
To kick off the series we have Arclightby Josin L McQuein, a Young Adult dystopian fantasy. Dystopia is big in YA at the moment, maybe because of the success of TheHunger Games, or perhaps just catching the mood of the times. 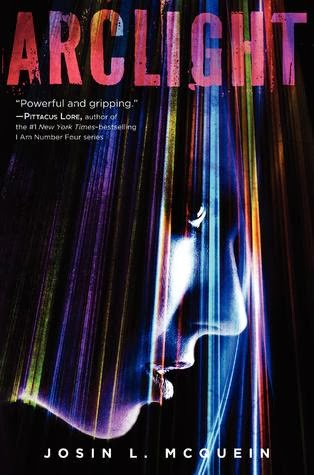 Reading the back cover copy, this one sounds almost more like horror:

“The first rule of Arclight: Light is safety. Light is life. The second: Never go outside alone. The third: No one ever comes back from the dark. But Marina did …”
Score!! How could I put it back on the shelf? You know how many books I’ve read where the main character shared my name? Out of all the tens of thousands I must have read in my lifetime? That’s right. None. The Jacks of the world have got it good. Every second damn thriller is about them. But us Marinas? We are a sadly neglected lot.
Look, I’m not a complete dag (quiet, you in the back row!). The book sounded interesting and I would have bought it anyway. I promise you will still enjoy this book even if you are not lucky enough to be named Marina. But it did kind of sweeten the deal for me.
Marina narrates her story in first person present tense (now it sounds like I’m talking about myself …). Sometimes this comes across as a little over the top, as in the opening paragraph:
“Someone’s attention shouldn’t have physical weight, but it does. Hate’s a heavy burden: hope is worse. It’s a mix of the two that beats against my skin as my classmates condemn me …”
But most of the time it has the effect of keeping us firmly with the character, feeling that we are experiencing her story with her as it happens.
And the story is a cracker, with some really juicy twists to it. Even better, Marina has amnesia, and if you’ve been reading this blog for a while you’ll know how much I love stories where the main character has forgotten their life. They always discover such terrible secrets lurking in their lost memories, and Arclight is no exception.
There’s also a love triangle, with Marina torn between two romantic possibilities, which is a popular trope in YA fiction. Normally I find them annoying. No one would really want to be in such a terrible situation, knowing that whoever they choose, someone else they love will be hurt. Yet so many books make it seem desirable.
However, in Arclight, there is a good logical reason for the situation, not just an indecisive teen trying to decide between two hot boys, and it makes the situation especially poignant. Apparently there is a sequel coming. I’ll be interested to see where McQuein takes the story, but this book is complete in itself (unlike some other YA titles which have simply stopped partway through the story and left you hanging until the next book – something that makes me a Very Cranky Reader).
So: where did Marina come from? How did she survive the Dark? Read Arclight by Josin L McQuein and enjoy uncovering the answers. But remember: “No one is safe when the lights go out.”
Next up in A Fantasy Alphabet: B is for Blackbirds.