Proving yet again that she is a cross between a particularly stupid golden retriever and a turnip, Two Planks has outdone herself. Today she devoured a chicken skewer that Baby Duck had dropped on the floor – wooden skewer and all. I am now anxiously watching her for signs of imminent death from pierced intestines. 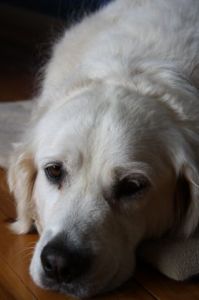 I’m trying to reassure myself. She’s eaten all kinds of weird stuff in the past, from half-bricks to chunks of wood to thorny plants, with no ill effects. And hopefully she did actually crunch that sucker up instead of swallowing the damn thing whole. But still.

I may only be a blue belt in taekwondo, but I’m a black belt in worry. Fingers crossed this is another case of me imagining dire scenarios that never come to pass.

Does anyone else have a pet with a death wish?