Whew! Lucky I didn’t make any New Year’s resolutions. Those babies would have been smashed already. Have I been exercising? Eating less rubbish? Writing every day? Updating my blog twice a week? Only if today is Opposites Day.

Not that I’ve been completely unproductive. I’ve sewn a few bags lately, including a tote bag for Demon Duck’s teacher that we both liked so much we were sad to part with it. 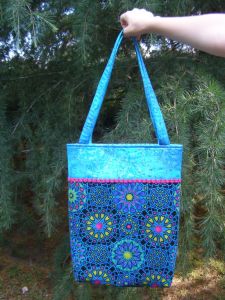 I also finished a more sedate handbag for myself. I’m wearing a lot of blues and browns lately so it goes nicely. 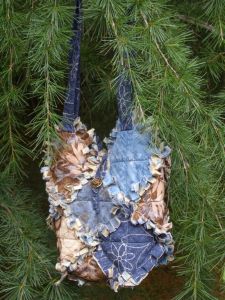 I’ve got stuck into the decluttering and have already thrown out a stack of scrapbooking magazines about four foot high. I’m still working my way through another stack almost as big. This job is part of the reclamation of the rumpus room as a usable space and not just a junk storage area, which has been hanging over my head for ages. It feels great to see the floor reappearing from under the piles!

A curious side effect of the sorting process is that is makes me want to scrap again – or at least mess around with paints and patterned paper, which I haven’t done in nearly two years. I dug out my old art journal and did a couple of pages, which was a lot of fun. This is one of them. 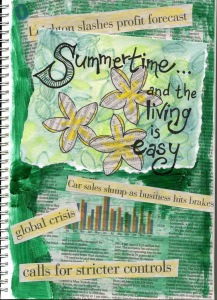 So no New Year’s resolutions, because I know I’ll break them. But goals – I can do that. Generally I aim too high and miss, but at least I get further than I would otherwise. Last year I wanted to finish two first drafts, Man Bites Dog and Starfire. I only managed Man Bites Dog, but I wouldn’t have done even that without something to aim for. I also wrote 50,000 words on a new novel, Dragonheart, plus started revisions on Man Bites Dog.

Another goal was to start submitting short stories for publication. I only submitted two, which wasn’t as many as I’d planned, but one got a very encouraging rejection and the other got published, so that went pretty well too.

Writing goals for this year are:

* keep up with the monthly art journal challenges at Blue Bazaar
* declutter and get organised
* have more fun!
* and I’m not even going to mention the whole exercise-and-diet thing.

The “have more fun” goal started well. On New Year’s Day we had afternoon tea with the neighbours that turned into dinner and a movie as well. Less successful (from my point of view at least) was an excursion to Jenolan Caves a few days later. But I’ll tell you about that next time I post on my new bi-weekly*-but-it’s-not-a-New-Year’s-Resolution schedule.

Happy New Year to all!

*I just looked up “biweekly” in the dictionary because I was having a vague moment about whether it means “twice a week” or “once every two weeks”. According to my dictionary it means both. Both?? They’re two completely different things! It’s an outrage!! What kind of sloppy good-for-nothing word is that?