Life is full of purple satin

Let’s face it: there’s never a perfect time to undertake a large project, is there? Like, say, writing a whole novel in a month. Life will always get in the way, whether it’s family emergencies, dramas at work, sickness, or just plain old daily grind. We all try to fit so much into our lives, it’s hard enough to carve out time for another big project even if everything goes smoothly.

I lost a great deal of time this November to making dance costumes for Demon Duck’s class of thirty kids. It was my own fault – I stupidly volunteered, underestimating, as usual, the time it would take. Funny how I always think I’m some superhuman production machine when these things come up. Ten bubble skirts and twenty singlets with fake satin braces sewn on them? Sure, no problem! 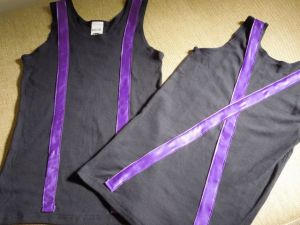 In the end, with the dress rehearsal mere days away, I had to put my NaNo novel on hold. For three whole days I did nothing but sew *@#%^$!! singlets, till I was so sick of the sight of purple satin I could scream, with not a single word added to my wordcount.

But eventually even this torment had to end, after 17 metres of satin, 600 metres of thread and about 60 hours of swearing, and I had to face the novel again. The idea of giving up was hugely tempting at this point. After all, that was 6,000 words I had to make up, and time was already tight because I wanted to finish the whole novel by November 30th, which I estimated meant writing 60,000 words instead of 50,000. A big job, and one I’d never managed before. To have lost three days, when I’d been determined not to miss any, was a huge blow, but that’s life, isn’t it? Just chock-full of damned purple satin.

I’m hopeful there’ll be a happy ending to this story. I have three scenes still to write, and three days left to do it in. It’s tight – tighter than I’d hoped – but should be do-able. I’ve passed 50,000 words, which is kind of a psychological barrier, and feel the end just over the horizon.

I’m glad I forced myself to go on. If you have a goal, it’s no use giving up at the inevitable setbacks. Giving up seems so much easier, and so tempting. Maybe there’ll be a better time later, you think, and you’re desperate for sleep and sick of the whole thing anyway.

But there’ll always be purple satin, in some form or another, and you just have to pick yourself up and keep going. However much the to-be-read pile beckons, or however many tempting crochet projects you find on the internet in those too-frequent breaks from novel writing!

Writing a novel is only glamorous and exciting for about the first week. After that it’s work, like any other task that takes hours out of your life. Like making *&#!!%* purple satin bubble skirts. Often interesting, occasionally exciting, but still work. It requires some stick-to-it-iveness. (I’m sure there’s a real word for that, but my brain is too fried at the moment. Tenacity? Stubbornness? Something like that.)

Every time this month I’ve sat down to add more words to this novel, I’ve thought “I can’t do this”. The temptation to give up never goes away. But every time I push myself to do just a little more, and slowly the story grows. Tortoise-like, I inch my way toward the finish line.

Have you ever felt like that with a big project? What kind of purple satin has life thrown your way?

2 Responses to Life is full of purple satin