I had a craving for bruschetta – but do you think I could find a recipe? Heaven knows why I didn’t think to consult the Almighty Internet. Google is a girl’s best friend! But after ratting through several cookbooks I came up empty-handed. Maybe bruschetta’s too easy for cookbooks to bother with?

Anyway, I figured I could work it out. Bread, tomato, a little balsamic vinegar, and that yummy green stuff. Convinced the thing I needed was oregano I went to my local greengrocer to buy some.

My local greengrocer doesn’t label his herbs. It would be entirely possible for someone to come home with a bunch of mint only to discover it was actually basil. This may or may not have happened to me …

So I had a good sniff and came up with the one that smelled like bruschetta. Brought it home and made something that tasted just like the real thing (if you ignore the fact that it was slightly soggy in the middle – but my tummy didn’t care). It looked a treat too. 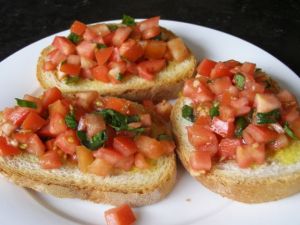 Only then I did find a recipe and discovered that the thing that smells like it belongs in bruschetta is actually basil, not oregano. I have a vague memory now that oregano has smaller leaves. As you’ve probably guessed by now I’d be the first one out the door in any cooking contest. It’s probably a good thing my greengrocer doesn’t label his herbs, or I’d have bought the wrong thing.

Hmmm. What do you think, internet? 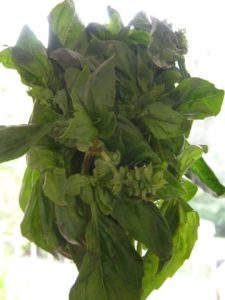