Finding the floor: Out of the Dark by David Weber

Finding the floor … my ongoing project to tackle the teetering tower of terror, otherwise known as the to-be-read pile. Up this time is Out of the Dark by David Weber. 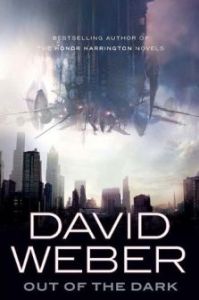 This one was actually a loving wifely purchase for my beloved. He loves David Weber. Lots of battles, aliens, guns galore. But the blurb on the back sounded interesting so I snitched it off the pile and read it before him.

And then I had to wait for him to read it so I could fully express my outrage at the BIG FAT CHEATING CHEAT of an ending.

Ahem. Anyway, as I was saying, the blurb sounded interesting. Earth has been conquered by aliens, and a few pockets of survivors are putting up what resistance they can. Many of these we only get to know briefly before the aliens stomp them out of existence. Resistance is indeed futile, if glorious, in most cases. Sergeant Steve and a small band of soldiers are trying to organise survivors in the Balkans. Back home in the US, former marine Dave and his brother-in-law Rob, who must surely be the most insanely well-prepared-for-the-apocalyse guys in the history of the universe, are building a network of resistance across the southern states.

So far so bleak for the human race. The aliens are extremely advanced, though they almost call off the whole invasion on arrival when they realise how advanced humanity’s technology is. Their last intel was from the Battle of Agincourt, and things have changed just a little since then! They aren’t allowed to take over worlds as advanced as Earth, but fortunately for the story the alien leaders are crooked enough to ignore the galactic rules and so the battle begins.

No problem there – I just skimmed through these bits and got back to the story, which was highly involving. Certainly a page-turner! The action built and built, the stakes got higher and higher, and I was on the edge of my seat, wondering how the hell the humans were going to avoid total annihilation, and then …

Well, I don’t like to give spoilers. The back of the edition I read certainly didn’t give anything away, but let me quote you from the blurb on the hardcover, which I found online:

“[things] look bleak. The aliens have definitely underestimated human tenacity–but no amount of heroism can endlessly hold off overwhelming force.

Then, emerging from the mountains and forests of Eastern Europe, new allies present themselves to the ragtag human resistance. Predators, creatures of the night, human in form but inhumanly strong. Long Enemies of humanity… until now. Because now is the time to defend Earth.”

You can probably guess from that, right? (And what sort of blurb gives away a Major Major Plot Point like that??) When the first vague kind of off-hand reference to something paranormal came up I ignored it. Nope, not going to happen. You’re imagining things. This is not that kind of book. This was late in the story, and it had been straightforward, real-world, shoot-em-up stuff all the way. No way was it suddenly going to jump the shark and veer completely off the road into the paranormal underbrush.

I still can’t decide whether it was a brilliant move or a terrible deus ex machina. But it certainly felt like cheating at the time. I thought I was reading science fiction, and all of a sudden I wasn’t. Your mileage may vary, of course. The Carnivore had no problem with it, though he was surprised at the change of direction. He thinks I’m too critical.

Perhaps I am, but a lot of the problem has to do with expectations. You don’t expect paranormal elements to suddenly crop up near the end of a straight science fiction story. It feels like cheating to fix a “real-world” problem by whipping out a magic wand. If there’d been clues earlier on that such things were possible it wouldn’t have felt as if it were coming out of left field so much. Maybe that’s why the hardcover had that spoilery blurb, to try to overcome that feeling. But it would have been better to address the problem in the story rather than on the back of the book.

3 Responses to Finding the floor: Out of the Dark by David Weber