C is for Chosen: Review of Chosen by Benedict Jacka 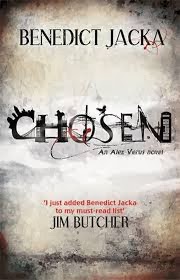 Chosen is the fourth in the Alex Verus series, about a mage living in modern London trying – and usually failing – to keep out of trouble. People always seem to be trying to kill Alex, often through no fault of his own, though there was that apprenticeship with a Dark mage that earned him a few enemies …
Now, in the fourth book, we learn much more about that long-ago apprenticeship, as the motive for the current attempts on his life are directly tied to his actions as an apprentice, despite his years of (relatively) clean living since. Alex has always been a bit of a flawed hero, and now we find out exactly how flawed.
Alex is a great character – something of an everyman, if you can overlook the fact that most regular guys can’t see the future. He’s done some bad things in his past, and now he tries to do good to balance it out, but he’s not perfect, and his good intentions are often hampered by a lack of trust from other magic users. This is the first book where he even has more than one friend, having always been a bit of an outcast.
And he’s no superman. He can’t throw fire or do anything flashy. His one power is the ability to see possible futures, which often allows for clever solutions to problems. And he needs every ounce of cleverness, as once the attacks start they keep on coming with barely a chance to catch his breath. The plot unreels at almost thriller-pace as it careers towards a surprise ending that promises a world of pain for Alex in the next novel.
The world of Chosen takes the “urban” part of “urban fantasy” seriously. London is so richly described it feels almost like another character. I love the sense of place in these novels. It feels like travelling without ever leaving home.
If you’re a fan of Ben Aaronovitch or Jim Butcher’s Dresden Files, you’ll love the Alex Verus novels. Chosen is a fast-paced addition to what is becoming a favourite series.