B is for Blackbirds: Review of Blackbirds by Chuck Wendig

By Marina | February 12, 2014 - 5:15 pm |December 11, 2014 A Fantasy Alphabet, reviews
Today, somewhat belatedly, we arrive at the letter B in my review series “A Fantasy Alphabet”, with Blackbirds by Chuck Wendig. 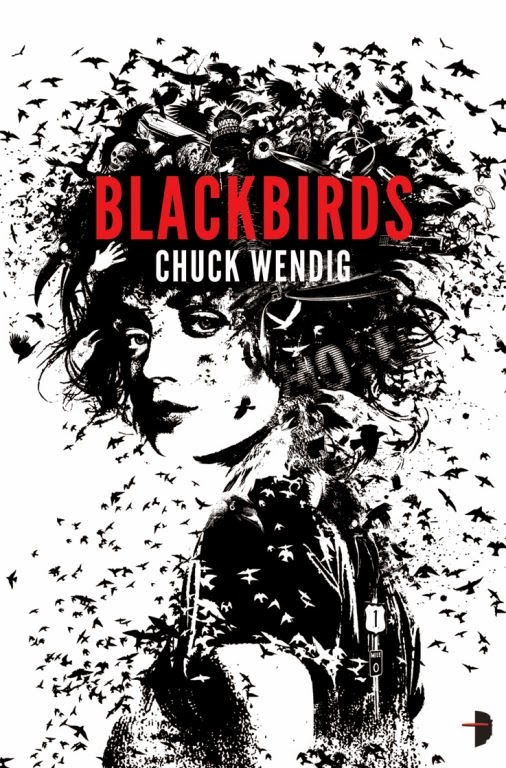 First up, don’t you love that cover? A clever and intriguing piece of artwork, with the title popping out as the only touch of colour. Very eye-catching.
It’s a clever premise too, and one that had me itching to read this book: whenever Miriam Black touches another person’s skin she experiences a vision of their death. She knows the cause, the date and time down to the minute, but not the place. She’s also learned, from bitter experience, that she can’t do anything to save anyone.
Naturally this has left her rather antisocial, to put it mildly. She’s damaged and embittered, living the life of a drifter, never getting close to anyone. She battles her misery with alcohol and a biting dark humour that brings some relief to the relentless gloom of the first-person narrative.
One night she hitches a ride with a truck driver called Louis, who seems like a genuine nice guy. Only problem is, when she touches his hand and sees his imminent gruesome murder, he’s calling her name as he dies. And then she meets other people, and begins to see how she might be involved, and realises Louis’ death scene might be her own too, if she doesn’t somehow save him.
This is a real and gritty adventure through the seamier side of life. If swearing in books bothers you, you won’t like Miriam. Of course, you may not like Miriam much anyway – she’s prickly and difficult to like, even though you can see her prickliness is a shield, and you certainly feel for the terrible situation she’s in.
Her great redeeming feature is her sense of humour, which often made me laugh. Chapter 10, for instance, is titled “The sun can go fuck itself”. Chapter 11 is “The Sunshine Café can go fuck itself equally”. Though the humour is dark, without it I don’t know whether I could have finished the book. The pace is relentless, and seems to be racing Miriam and the reader to a terrible inevitable ending. As a person who usually reads lighter fare, the sense of impending doom hanging over the story filled me with dread.
That’s not a criticism, of course – when a book makes you feel something so strongly, the writer’s done a good job. And a reasonable person wouldn’t expect a read full of sunshine and roses from a story about someone surrounded by constant death.
It was a relief, though, to find some light at the end of the tunnel after all, and a ray of hope for Miriam, whose basic decency finally manages to claw its way free from her hard shell and arrest the story’s terrible downward spiral. Certainly not a Happily Ever After, which wouldn’t have suited the tone of the book at all, but a hint of redemption that raises interesting possibilities for the next book in the series.
“Grimdark” is a subgenre of fantasy that’s big at the moment, due to the popularity of authors like Joe Abercrombie and George RR Martin, but usually appears in epic fantasy, in medieval-type secondary worlds. I haven’t seen it used in urban fantasy like this before. (It may have, of course – I’m not claiming to be familiar with the entirety of the urban fantasy genre – but it was a new experience for me.)
If you like your fantasy grim and edgy but you’re tired of the swords-and-sorcery flavour, Blackbirds could be a good choice for you. It won’t be to everyone’s taste, but it’s a well-written, immersive experience.
Next up in “A Fantasy Alphabet”: C is for Chosen.