A boy, a sphinx, and an unanswerable riddle

I have a new story out! It’s only a short story (quite tiny at 4,000 words), but it makes me feel all accomplished and author-y to have two books to my name—even if they are only ebooks at present. (Don’t ask my why the paperback of Twiceborn isn’t out yet. Sigh.)

So, new story: it’s called “The Family Business”. Here is the cover. Cute, no? 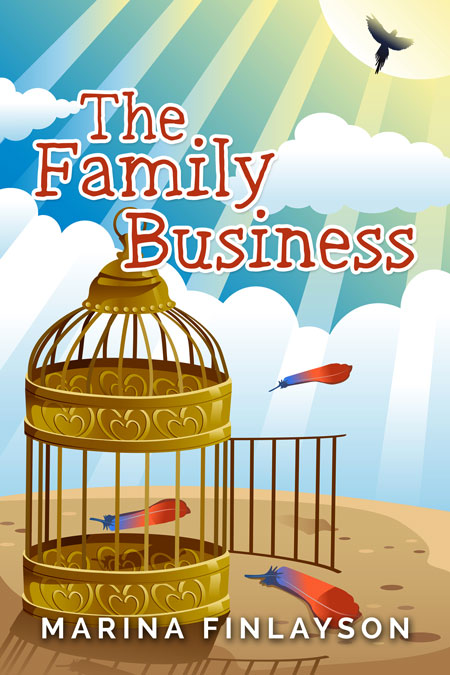 “Renardo and his brothers are up to their eyeballs in debt, with one last chance to save their merchant business (and their gonads) from the moneylender. The great city of Tebos is holding its Festival of Song in three days’ time, and they have a wagonload of songbirds to sell.

There’s just one large, man-eating problem: the bored sphinx who guards the city’s gates, and her deadly riddle game. Renardo doesn’t even want to be a merchant, but somehow it falls to him to outwit the sphinx. No pressure. All he has to do is come up with an unanswerable riddle.”

It’s on sale at Amazon

for only 99 cents. Grab a copy and fill in a happy fifteen or twenty minutes on your next commute, or while you’re waiting at soccer practice/the doctor’s surgery/whatever.

And speaking of 99 cents: Twiceborn is also on sale

at that bargain basement price for the next few days, so if you’ve been meaning to grab a copy of that but haven’t quite gotten around to it, now would be a good time! It was featured on Valentines Day on the Kindle Books and Tips blog. Not exactly your typical Valentines Day fare, unless your idea of romance includes homicidal dragons, but oh well. Not being much of a romantic myself, the significance of the date had slipped my mind when I made the booking!

So, you may be wondering why “The Family Business” has suddenly appeared. Weren’t you supposed to be working furiously on The Twiceborn Queen, Marina? You never mentioned anything about some random short story being published in that big long list of things you were going to achieve that you blogged about recently.

Well yes, that’s true. Life, as they say, is full of surprises, and one that landed in my lap mid-January was a sinus infection that is still ongoing. Surprise! At its worst I was getting maybe three hours’ sleep a night, and let’s just say that the revision schedule fell a little behind.

I decided to call it early on and shift my deadline with the editor from 1 March to 1 April, which meant that it would be four months between releases instead of the three I’d planned. So I decided to put out a short story instead, one that had already been published a couple of years ago in a magazine, so it didn’t need any work from my end apart from organising a cover and the formatting.

I’m still on the first revision of The Twiceborn Queen, a little over halfway. That’s not where I’d like to be, obviously, but all the new scenes I had to add were in the first half, so hopefully progress will be quicker from here.

The Carnivore even took the ducklings out on Valentines Day so I could work without interruptions. To a writer, that’s the best Valentines Day present ever!

When they came home, Drama Duck presented me with a single rose, nicely gift-wrapped.

They were both grinning like idiots, and she couldn’t hold it in any longer.

“We totally didn’t find that on the train where some guy had left it behind,” she added.

The Carnivore gave me a fond smile. “You’re worth it, honey.”

Hope you enjoyed Valentines Day, if you celebrate it. Did you get anything nice from your significant other (scavenged or otherwise)?

4 Responses to A boy, a sphinx, and an unanswerable riddle