Hi, Sydney, I’m home! I brought you a little souvenir from my holiday – bucketloads of rain. No, really, I insist.

Apparently there was so much rain in some parts of Sydney last night that shopkeepers were sweeping it out of their shops this morning.

Yes, the drought-breaking duck family has arrived. No, no, don’t thank me. I’m happy to provide this public service. They were begging us to stay in Bendigo. They had the best rain for three years while we were there.

But I should start at the beginning.

Did I mention the heavenly firehose that dumped on our car all the way to our friends’ farm? Yes? Think of it like those bottomless cups of coffee you can get, where every time your cup looks like it might just be thinking about being empty, the waitress comes and fills it up again. We had our own personal stormcloud, just like that. Continually topped up and stuck to us like glue.

Whenever there was the tiniest break in the weather the kids would venture out. Go around the corner to herd cows? The heavens would open. Squelch through the boggy paddocks just 100 metres to look at the creek? Downpour plus hail. And so cold it’s a wonder nobody lost their extremities to frostbite.
But there were friends and games and good conversations. Not to mention puppies: 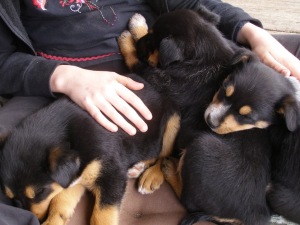 Demon Duck spent most of her time sitting out on the verandah in the freezing cold loving on those puppies. When we left she cried for the first half-hour because she missed them so.

And then we were across the border into Victoria, first stop Glenrowan, the place where Ned Kelly, a famous bushranger, was finally caught after being besieged at the local inn. Glenrowan is a small place, and it seems to me that the only reason it still exists is to service the tourist industry. There’s a ginormous statue of Ned Kelly in the main street and a rather peculiar “show” that recreates the showdown at the inn. You move through a succession of rooms peopled with somewhat creepy dummies, some of which move a little, while the events are narrated.

What an interesting experience for the children! we think. Bringing history alive! So we fork over an exorbitant sum of money and lead the ducklings into the first room.

Fortunately we are the only ones enjoying this educational experience at the time, since as soon as the lights go out Baby Duck starts to howl. Darkness + ominous music = total meltdown. I know the next room is well-lit, and I’m still smarting from the tourist-gouging admission price, so I refuse to give in to his pleas to leave.

The next room is better – a bar scene, where Ned and the rest of the gang are discussing their woes and planning the next move. There are even cute dogs, and pretend mice “running” along the bar. He is reasonably calm by the time we move outside for the shootout.

Unfortunately – this is starting to sound like a game of Fortunately/Unfortunately, isn’t it? – unfortunately we are then ushered into a tin shed and “shot” at. It’s dark and the sound of gunfire is loud, the smell of gunsmoke strong. Cue more sobs.

Then it’s on to a dark room containing an open coffin with Ned’s body in it. By this time I am wanting to shake the man who sold us the tickets for not warning us that the show might not be suitable for small people. I’ve seen it before, but that was seventeen years ago and my recollections are very hazy.

We finally make it out, but not before the body in the coffin has moved and another body has dropped down through a trapdoor in the roof as Ned is hanged. “Such is life,” were Ned’s famous last words, but I doubt Baby Duck will take anything educational away from this experience. As a public service, I give you the warning the man should have given us: overpriced but educational for older kids, too scary for more sensitive little souls.

We troop off through the rain and check out the museum, then pile back into the car and shake the mud of Glenrowan from our feet, en route to Bendigo, where we find a very comfortable family room at a motel and eat a yummy Chinese dinner.

Holiday statistics for our first day in Victoria:

Rainfall: epic – did anybody bring an ark?
Other waterworks: two out of three children reduced to sobbing wrecks.
Accommodation and food: good.
Are we having fun yet: the day is redeemed by a stop at a marvellous adventure playground on the way to Bendigo.

4 Responses to The travelling drought-breakers, Part 1