Tales from the building site: The Big Wet

Not so long ago, Sydney was in the grip of a drought that had been going on for nearly 10 years. We’d forgotten what it was like to be able to wash our own cars. If you wanted to water your garden, there were certain times of the day – and as the drought worsened, only on certain days of the week – when that was allowed.

The newspapers were full of scaremongering. Practically every week they reported the ever-sinking levels in the dam that supplies Sydney. Most Sydneysiders could tell you to the nearest decimal place exactly what the level was. What would we do when the water ran out? For it seemed to be a question of “when”, not “if”.

If only we’d started our renovations earlier, no one need ever have worried. They needn’t have built that white elephant of a desalination plant, if only we’d had the community spirit to remove our roof a couple of years before we did. The drought finished a year or so ago, but if we’d known, we could have knocked it on the head years earlier.

Because, guess what? Ever since we started renovations in September, it’s done nothing but rain. This summer is officially the wettest in 50 years. We’ve had no more than four or five hot sunny days the whole season.

For most of its young life, our new upstairs room has looked like this: 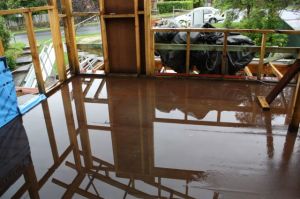 That’s a lake at least two inches deep. And when it gets over the level of the bottom timber of the framework, it runs through the roof cavity into the rest of the house. We have regular waterfalls from our bathroom ceiling. Drips and runs and water damage in the hall and adjoining rooms.

The day after the Carnivore proudly moved his wine into the new wine cellar, even that got flooded, as water pooled in one of the bedrooms which is currently open to the elements and leaked down on to the wine racks below. Now the cellar smells digustingly of mold and damp.

We have a roof now, as I think I told you before, but since there are no walls the rain still drives in and pools on the floor, and we still get the occasional unplanned water feature in the bathroom. We’ve been waiting since November for bricks to rectify this problem, but there’s still no sign of them. It would be nice to have walls again. Just one of those things you take for granted until you don’t have them, and then all of a sudden “walls” becomes an impossible dream, the pinnacle of all your desires. Forget winning the lottery, just give me walls.

Though I guess if I won a big enough lottery, I could buy a Real House. With Walls.

Come back, Drought. All is forgiven.