Tales from the building site, Part the First 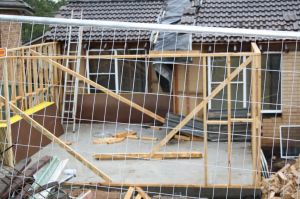 This is what my house looks like at the moment. The Carnivore and I are sleeping in the kitchen; the girls have set up their bedroom in the lounge room. Everything is Chaos, Confusion and Covered in Crap.

You know when you’re on a beach holiday, how you sit on the edge of your bed every night and brush the sand off your feet? It’s like that, only with dirt instead of sand. In spite of frenzied sweepings and moppings, there’s so much dirt and clay outside I just can’t keep it out.

It will all be worth it in the end, of course. We’ll have a new office for the Carnivore, freeing up a bedroom so the girls don’t have to share. There’ll be lots more storage and a big attic room up top. Can’t wait. In the meantime we’re crammed into one end of the house falling all over each other.

Last Saturday night the Carnivore and I came home from a night out to be greeted by the babysitter telling us the girls were in our bed, as their room was leaking. Sure enough, water was running down the walls in there. The builders had taken off part of the roof and clearly done a less-than-optimum job with the tarpaulins. More problematic, they’d also removed the outer bricks, leaving the inner walls (and their power points) exposed to the weather. And man, did we have Weather that night! It bucketed down.

Not surprisingly, the power went off about three o’clock in the morning, and we didn’t get it back on till after lunch on Sunday, after the builders had clambered around on the roof in the pouring rain to make it all watertight again.

When they came back on Monday they removed those power points. Seems to me it might have been smarter to do that before they removed the brick walls, but hey, it’s all part of the adventure, right? What’s a building project without a few horror stories to tell later?

Fingers crossed that that’s as bad as it gets! At least the ceiling didn’t collapse on the bed, as happened to a friend of mine when she was doing extensions.

How about you? Survived some building works and lived to tell the tale? Tell me your horror stories to make me feel better!