Starting can be daunting.

What if it doesn’t turn out the way I envisaged?

What if I make a mistake and have to redo everything?

As in: what if I chain 210 stitches, laboriously crochet back along them and get to the end of the pattern and have five chains left over? And rip out the whole thing and redo it, only to not have enough chain left to complete the pattern this time?

Well, then we fudge it.

The important part is to get started. You can procrastinate forever because you’re afraid things won’t be perfect, but if you don’t give it a go you don’t get the chance to learn from your mistakes. (And here we take “learn from your mistakes” to mean “figure out how to fudge crochet stuff-ups”. Don’t give me that look – short-cuts still count as learning!) Things don’t have to be perfect, they just have to get done. Most of the time no one but you will know it’s not the way it was “supposed” to be anyway. 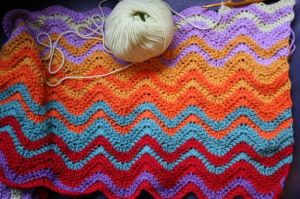 See? Looking good, isn’t it? Who cares if it’s one wave shorter than the pattern said? I’ve got going now and I’m loving it: the soothing rhythm of the crochet, the delight of watching the colours play together as I add each new one.

Certainly beginnings are important, but they’re not the whole story. This goes for writing too. It’s great to hook readers with an amazing first paragraph, but if the rest of the story’s not as good you won’t hold their attention long. Conversely, some of the best stories don’t have beginnings that reach out and grab you by the throat.

I always notice first sentences and mentally grade them, but they’re not a reliable indicator of the quality of the book. Some that have made me laugh out loud belonged to books that ultimately left me cold. Some great books had real attention grabbers, while others started off with something quieter and then sneaked up on me with their awesomeness.

I’ve been thinking about first sentences again recently because Drama Duck collected a whole bunch of them for her Nano last year. She decided to write a collection of short stories instead of one longer one, and asked all her friends (and some of her teachers) to give her a first sentence she could use as a prompt for a story. She ended up with about 30 sentences and got 10 or 12 stories out of them.

Demon Duck and I thought that sounded like fun, so the three of us picked one of her sentences and decided we’d all write a story from it. It’s always interesting to give the same prompt to different writers and see how widely the resulting stories differ.

Our sentence was: “The man in black could just be seen behind the maple tree.”

So far I’m the only one finished and I’m waiting rather impatiently to see how my fellow writers dealt with the challenge. Hopefully Drama Duck doesn’t decide to start another magnum opus or I could be waiting a while.

But it was a fun exercise. I had no idea where I was going with it, so I just started. Added one sentence. Then another one, till an idea started to emerge – demonstrating once again the power of Starting.

Oh, Starting, how I love you! Your possibilities, your excitement! I just wish you led to Finishing more often. There’s nothing like the feeling of accomplishment Finishing brings, even if it’s just a 1000-word story you’ve knocked out to amuse your children.

It could take me a little longer to finish this sucker. 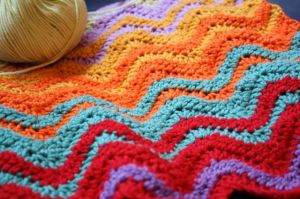 But I’m working on it.