Like many great writers, Baby Duck has a favourite theme he returns to over and over again. His backlist would be the envy of many a writer, and all except one of his works – the classic Chickens in Space – features monsters. But even Chickens in Space is generously supplied with aliens, which is nearly the same thing.

He spends hours sometimes, drawing page after page, then he brings them to me to staple together and he dictates the text to me. If I’m really lucky I get to palm this job off on to Drama Duck, though then I worry that he’ll show it to someone and they’ll think I made all those spelling mistakes, so usually I do it. It can take an awfully long time sometimes, but its kinda fun too. His monsters are endlessly inventive, though the story usually follows a well-worn track, featuring a portal that opens into our world to let the monsters in, followed by lots of fights and explosions. Not too dissimilar to your average box-office smash, in other words.

The latest effort features a new twist – meta-text. After a dozen pages of the usual monster mayhem, I find something puzzling. 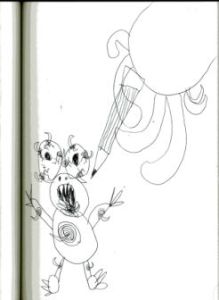 “Why is this monster being attacked by a giant pencil?” I ask.

The look he gives me says he’s wondering how someone can be that stupid and still tie their own shoelaces.

“He’s not being attacked by a giant pencil, Mum. That’s just showing people how to draw him.”

It’s so hard to get good mothers these days.

I find recurring themes in my own work too. Some are conscious. I’m fascinated by transformations, for instance. One of my favourite fairytales is Beauty and the Beast. The Little Mermaid is another. I love a good makeover story, like Cinderella, or Grease. Shapeshifters and werewolves are great. (As long as they’re not too scary. I still have nasty memories of some werewolf movies I saw about 25 years ago, back when werewolves were still beasts and not just extra-hairy toyboys, a la the current paranormal craze.)

Some recurring motifs seem to sneak in there without me realising. I was thinking about my next Nano novel the other day and a lighthouse appeared in it. That’s funny, I wrote that other story about a lighthouse … Why do lighthouses keep popping up? Which led to some sniggering about phallic symbols from the more juvenile aspects of my personality, but no enlightenment. As far as I’m aware, lighthouses mean nothing to me, so why do I keep wanting to write about them? The mind is a very weird place.

What are the themes and motifs that you keep returning to? Or what themes are you drawn to in the work of others? Weird enquiring minds want to know.