Random (mis)firings of a tired brain

Wow. I’m more tired than I thought. I typed that heading and my brain immediately emptied. Like sticking a pin in a balloon. Pop! No more thoughts. Completely goneski. If only I could bottle that and sell it at yoga classes.

So, yes, tired. Not enough sleep – bad. Lots of exercise – good, but tiring. Too much stress, also tiring. However, there have been some wins this week. I have a story on hold at 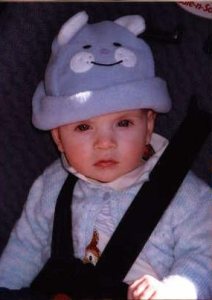 Moving on from memory lane, and seeing as its Wednesday, time for a Wednesday WIP report. Nothing doing on the writing front, but I’ve made a little progress with quilting. 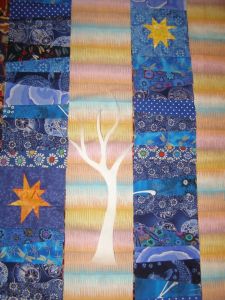 This is one I’m working on, playing with contrast and trying to loosen up a little. The wonky stars and stripes were great fun. Drawing the trees gave me a lot of trouble. I kept making them too realistic, when I wanted something more stylised and free, something that said “tree” without getting bogged down in detail. This is the paper pattern for the first one. They won’t be white in the end but they do look rather nice like this. Maybe I should have made them white! You can be the judge when I get it finished.

It’s fun designing your own quilt. I haven’t done it for ages, but I’ve been going to a wonderful monthly workshop at Material Obsession, which always leaves me inspired and wanting to try new things. Even – gasp! – hand quilting, which I did once and decided was far too slow for me. But Kathy, the teacher, is so full of energy and enthusiasm she could talk you into anything, so that’s another project that is inching along. I must say, I find hand work very soothing when I make the time for it. It’s just that there’s always so many other things clamouring for attention!

Still, that’s not such a bad problem to have. At least it’s never boring.