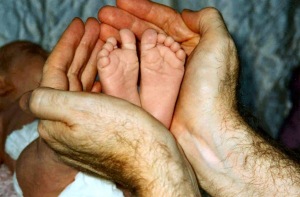 Look at these cute feet — Baby Duck at two months old. Who would have thought that five years later they’d have turned into instruments of torture?

I’ve noticed a funny thing about small children. In daylight they seem so soft and cuddly, all plump little legs and sweet rounded faces. But in the middle of the night they sneak into your bed and they’re suddenly all hard angles and nasty pointy bits. There’s nothing quite like being woken from a sound sleep by a vicious elbow jab to the kidneys.

And then they do the starfish thing, arms and legs sprawled across the bed, so that mum and dad are crammed into 10% of the space while the small pointy thing luxuriates in the other 90%.

Baby Duck is a master of the art. I’m pretty sure he grows extra legs at night too. There seem to be a lot more than two knees jammed into me. I feel like the meat in the sandwich crammed between him and his father. Sometimes he doesn’t even leave me enough room to lay my head flat on the pillow.

I suppose I’ll miss it when he grows out of this stage, but then again – maybe not. When you’re expecting your first baby you know you’re in for some disturbed nights. What nobody tells you is that it can go on for years. You go through the baby thing, the weaning thing, the waking up in the night (every night!) crying for water/cuddles/toilet/whatever-they-damn-well-please thing, the coming-into-your-bed-every-night-thing, then just as you think you might finally be getting it under control, along comes Number 2 and it starts all over again. Repeat as many times as your sanity allows.

In our case, Drama Duck is nearly 10, and we’re still woken up every night by Baby Duck, so a night of unbroken sleep is only a fading memory. I figure once he grows out of it we might have as much as five years of good sleeping before we get to the dreaded “waiting up for teenagers to come home” stage. Can’t wait! For the sleeping bit, that is. I can definitely wait for the teenager bit. Everyone who’s been there assures me that part is much worse than the original sleep-loss stage.

That’s another thing they don’t mention at antenatal classes. It’s all “how exciting, your first baby!”, when they really should be saying “are you mad? you’re creating a teenager!” At least I get to practise on Drama Duck first. Heaven help us all when it’s Demon Duck’s turn.

2 Responses to Ode to lost sleep