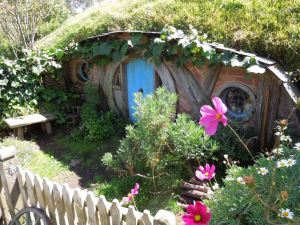 Happiness is walking through your childhood fantasy world.

I was ten years old the first time I read The Lord of the Rings. It caught my imagination as no other book had done before, and few since. I wrote stories set in the world of Middle Earth, using my favourite characters. I forced my uninitiated (and probably bored) friends to play endless games of make-believe where we dressed up as Elvish princesses in my mother’s old dancing petticoats and lamé dresses. I committed many of the poems to memory, and reread obsessively, adoringly.

It’s safe to say that The Lord of the Rings is The Book that started my lifelong love of fantasy, and when the movies came out and – oh miracle of miracles! – they didn’t suck, I fell in love all over again with Aragorn and Sam and the elves and the Riders of Rohan, with the glories of faded Gondor and the sweet green fields of the Shire.
So you can imagine my excitement when I got to walk those green fields and see the Shire FOR REALZ on our New Zealand trip. (Actually, you probably can’t. I was so ridiculously thrilled to be there I didn’t stop grinning like a loon the whole time. Is it shallow to admit it was the highlight of my trip? No offence, New Zealand, you’re beautiful and all, but you can’t compete with the love I bear the Shire. Even though you kind of are the Shire. I know. Don’t try to use logic on me.)
It was a picture-perfect day for a trip to Middle Earth, too. Bright sunshine, beautiful blue sky, absolutely glorious.
Oh, those hobbit holes! They were divine! They had the sweetest little cottage gardens: 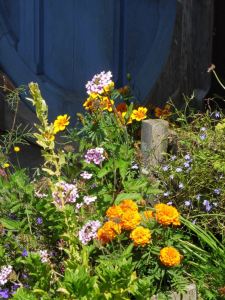 Such attention to detail! Each one had unique features: bellpulls, woodpiles, letterboxes, tools left lying around. Some front doors were weathered-looking with faded or peeling paint. Others obviously belonged to houseproud hobbits and were painted bright yellow, red or blue. 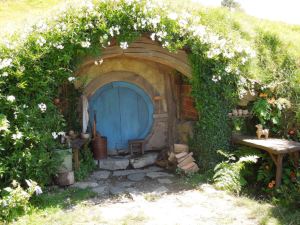 Bag End, of course, had a handsome dark green door and stood high on its hill overlooking the rest of Hobbiton. It was very large by hobbit standards – no wonder the Sackville-Bagginses coveted it! – and had thirteen windows, whereas the most any other hobbit hole had was four. 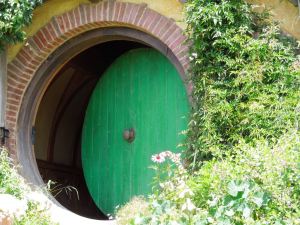 The oak tree on top of it was the only fake tree on site, and boasted over 250,000 fake leaves imported from Taiwan and individually hand-wired on. 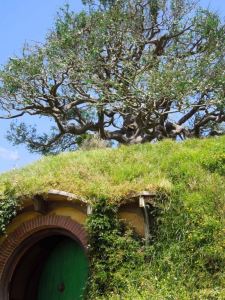 The tour was very informative, with lots of inside info about the making of the films. Highly recommended if you’re ever in New Zealand!
Now, if only they’d build a real Lothlorien, my childhood dreams would be fulfilled!

If you could pick any fantasy world to visit in real life, what would it be?