Even dragons have to cut their toenails 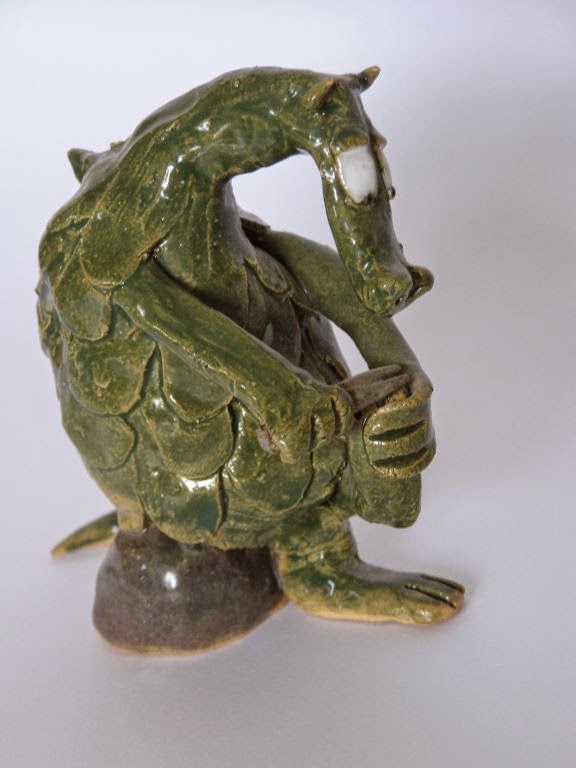 This is the very first dragon I ever bought myself, in those long-ago days BC (Before Children), so I guess you could say this little guy kicked off the collection. We were on a romantic weekend away at a very swish hotel in the Blue Mountains. It must have been winter, because it was snowing when we arrived late on Friday night, which is something we Sydney-siders rarely get to see, and a huge log fire burned in the massive fireplace in the foyer.

The Blue Mountains are only about an hour’s drive from where we live, but they feel like another world. They’re much higher and colder than Sydney, so they get the occasional snowfall in winter. They also feel about fifty years behind the rest of the world in terms of architecture and the pace of life there. Little towns are scattered among thousands of hectares of largely untouched bushland. There are no Macdonalds anywhere in the Blue Mountains, a fact of which the residents are very proud.

It was all very atmospheric, but so f-f-freezing outside that we spent nearly the whole weekend in the hotel. Browsing in the gift shop, we found some quirky little dragon statues. There’s a  big artist community in the Blue Mountains, so I’ve always assumed they were made by some talented local, though I don’t know for sure.

I couldn’t resist the absurdity of this one, sitting there cutting his toenails with such a look of concentration on his face. I guess dragons can’t spend all their lives terrorising castles and kidnapping princesses. At the end of the day, someone still has to do all those domestic duties, like cleaning the lair, bathing the baby dragons, and attending to matters of personal grooming.

This one looks so comical he always makes me smile. He also reminds me of a time when romantic weekend getaways for two were still an option.

The Blue Mountains feature in my forthcoming novel, Twiceborn – complete with dragon. Not the cute kind that sits around cutting its toenails, though! The beautiful Mountains take quite a beating – all that bushland plus dragonfire … not a good combination.

But if you think that’s bad, wait till you see what happens to the Sydney Harbour Bridge!

4 Responses to Even dragons have to cut their toenails