Confessions of a worrywart

By Marina | May 8, 2009 - 10:42 pm |December 11, 2014 parenting, worry
My mother has a black belt in worrying. Nothing is too large or too small for her to fret over, and if she has nothing to worry about, well, she just dreams something up.
It’s possible I may have inherited a tiny little smidge of this worry gene. I’m nowhere near her level of expertise, and I do try to keep it under control, but it’s not easy. “Hello, my name is Marina and I’m a worrywart.”
It also seems to be infectious. The Carnivore will occasionally give me an accusing glance and say, “I never used to worry about things like [insert trivial thing here] before I met you.”
It’s certainly been worse since I had children. I worry about every little facet of their lives. I worry that they’ll turn out like me. I worry that they won’t.
It seems as if the girls may be turning into sportswomen. Nothing could be more astonishing to me. If they grew wings or sprouted an extra head I wouldn’t be more surprised. There are rocks that are more interested in sports than me. And yet here they are, both keen and competent netballers. And today they had their first tennis lessons and loved it.
I would think that there must have been some mix-up at the hospital and I accidentally brought the wrong babies home, except …
Yeah, I worried about that too. And let me tell you, there is no greater worrier than a crazy, hormone-filled pregnant worrier.
When Drama Duck’s due date was approaching, I sprang a special surprise on my obstetrician.
“When the baby is born, I want to write on it.”
My obstetrician was a lovely man. He didn’t laugh or offer to prescribe drugs for the crazy pregnant lady.
“I seeee. Would you mind telling me why?”
“I’ve gone to a lot of trouble to create this baby, and I don’t want to accidentally bring the wrong one home from hospital.”
“You are aware that they put ID tags on the baby’s wrists and ankles in the hospital?”
“Yes, but I’ve heard they can slip off and I want to be sure that I get my baby.”
“You know that every time the nurse brings your baby to you, she will check the ID tags and ask you to check them too? They’re very careful about it.”
Don’t care don’t care don’t care I want my baby. I had nightmare visions of getting the wrong one and then five or ten years later being told I had to give back the child I had raised and loved as my own.
When he saw that I was set on it he asked what I was going to write with. I hadn’t expected that question.

“I’ll give you a surgical marker. It won’t wash off for days.”
See? I told you he was a nice man. And he did, too. I have the photo to prove it.
Then the only question was what we should write. The Carnivore and I discussed options such as “Ours” or “Property of …”. In the end we decided on the nickname we had given her through the pregnancy, when we didn’t know who she was. Actually mainly he had given her.
Thus my flawlessly beautiful baby daughter came to have the word “SLUG” printed on her back in her daddy’s messy handwriting. 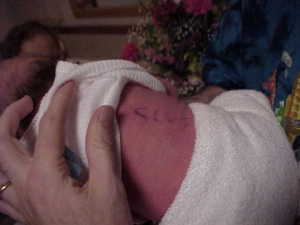 4 Responses to Confessions of a worrywart