Can you believe that? January again?? It seems to roll around faster every year!
Have you made any New Year’s resolutions? What are they?
I only have one this year, but it’s a biggie. I’m determined that 2014 is the year I finally start indie publishing. The learning curve is terrifying, but I’ll just have to grit my teeth and get on with it. Plenty of other people have managed it.
And I’m sure I won’t be lying on my deathbed one day wishing I’d spent more time faffing around on the internet. Publishing is the one big item I simply must tick off the bucket list. 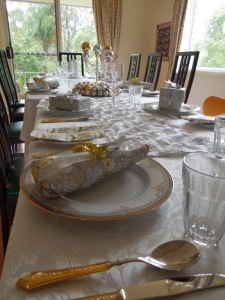 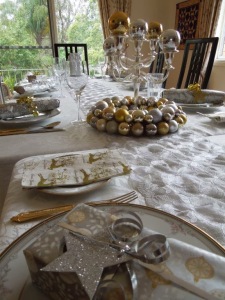 Christmas already seems like forever ago, though it was only last week. Before I forgot, I wanted to show you how pretty my table looked for Christmas lunch. There were only a few of us, but we had a lovely day.
My side of the family got together for Christmas earlier in December because some of the family who live overseas were visiting. One person hadn’t seen Baby Duck since he was a toddler.
“You’ve grown so much!” she said to him. “How did you do that?”

I was amusing myself trying to write haiku yesterday. There’s a local haiku competition coming up and I thought, why not? I’ll give it a whirl.

I remember writing haiku at school when I was about Drama Duck’s age. Back then, of course, it was all about the physical structure: the three lines of five syllables, then seven, then five again. I doubt my teacher even mentioned the finer points of nature/seasonal imagery or the way a haiku captures the essence of a moment, gives an unexpected insight. If she did, I certainly wasn’t listening!

I found a gorgeous definition of haiku, itself a haiku, on the haikuoz website, by a bloke from Perth called Andrew Lansdown:

“Haiku are pebbles
poets lob into the pond
of our emotions.”

So I was sitting there, scribbling away, counting syllables on my fingers, when Demon Duck asked me what I was doing.

“Oh, we’ve done that at school,” she says, with all the lofty confidence of a nine-year-old. “I’ve written 16.”

Then she looked over what I’d written, counted the syllables and said, “That’s good, Mum, you’ve got it right.”

Next up was Mr I-don’t-have-a-poetic-bone-in-my-body, aka the Carnivore.

“What are you doing?”

Maybe that nine-year-old confidence wasn’t misplaced after all. At least she knows more than her father about haiku.

After I’d explained haiku, including how they’re usually about nature, he said:

“But you could write them about anything, right? Important things, like tax?”

Later in the evening he came to tell me he’d written one, grinning from ear to ear. I present it here for your edification.

He is such an accountant.

… to bring you a public service announcement. Jacqui Robbins has offered an amusing challenge on her blog: to write the worst possible first sentence for a children’s picture book ever. Is good! Is funny! … is nearly over!

Entries close on the 15th, so I have been slack in not telling you before this. Hop on over and join in the fun. Some of the entries so far require a strong stomach. I’ve had a couple of attempts myself, but I fear I shall never make it as a picture book writer – too wordy. Witness one of my efforts:

“Maybe the smell should have warned him, or the way Tricky Tim sniggered as he held out the bowl, but Greedy Gordon never said no to chocolate ice cream and by the time he realised what he really had in his mouth it was too late.”

Jacqui, however, already is a picture book writer, so her sentences are much better, eg:

“Fuzzy the Bunny lived with his Mama Bunny, Papa Bunny, and his sister, Roadkill, in a hutch at the base of a tall oak tree.”

Jacqui’s new book, Two of a Kind, has just come out, and promises to be full of all sorts of authorial genius. I bet it is even good for you.

And speaking of good for you, I bought a loaf of packaged herb bread to have with dinner tonight. As I prepared to put it in the oven, I noticed the advertising on the pack loudly trumpeted that it was “suitable for vegetarians”.

You know, unlike all those other loaves of bread that are made of meat.

I realise it’s childish of me, but just typing that title makes me smile. Imagine how much fun I’m going to have writing the story!

Drama Duck was wearing a pair of glittery jeans the other day and I started calling her Sparklebum. This led to a very silly conversation where we decided that Sparklebum would make a great name for a fairy. Poor Sparklebum! The other fairies twinkled all over, but alas! her twinkles were confined to just one spot …

We agreed that we’d both write a story featuring the adventures of Sparklebum. There’s nothing like a hint of competition to get the creative juices flowing! Baby Duck was keen to help too, though his contributions were mainly along the lines of “and then Sparklebum did a really big sparkly smell and saved all the other fairies”. Small boys and toilet humour = a match made in heaven.

I was thinking of having Sparklebum being the only fairy able to save fairyland because of her peculiarities. Your typical “and then all the other fairies learned to accept Sparklebum just as she was” thing. But then I thought … naaah. Forget parental propaganda. Let’s have some fun. Let’s make her really naughty.

So I don’t know where Sparklebum is going to end up. I had the first line of The Hobbit running through my head yesterday, so this is where she starts at the moment:

“In a hole in a tree there lived a fairy. It was a very large hole for such a small creature; it could easily have fit a whole family of owls or possums, but Sparklebum lived there alone. The fairy council had thrown her out of Daffodillia when she was only little, which seems cruel, but it was either that or nobody in the fairy city would ever have got a wink of sleep again, due to
Sparklebum’s rather unfortunate affliction.”

Okay, Drama Duck, over to you.

For fear that my ten-year-old may outdo me, more helpful suggestions for Sparklebum’s adventures than Baby Duck’s will be warmly welcomed in the comments …